Posted on April 26, 2013 by Austin(@NE_Austin) in Features, Podcast Stories, Reviews, Wii U, Wii U eShop

What have you always wanted in an open world game? Pig cannons? Rogue Aliens? Well you’re in luck! The latest installment in the LEGO franchise from TT Fusion and the LEGO Company gives you all of that and way more– and I mean WAY more.

People have been waiting for the bigger Wii U titles to come out, but there hasn’t been much to hold us over. Mario and Pikmin are big names but are they unique and deep enough to fill the hole in our hearts? Well, okay, of course! But I believe LEGO City also does just that; it has hours and hours of game playtime and will keep you distracted with a vast open world while we continue to wait to more releases. 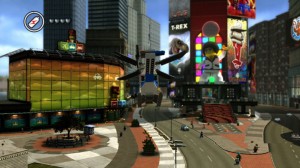 The story of LEGO City Undercover begins as our protagonist, Chase McCain, sails back into the “crime filled” jungle that is LEGO City. He had previously been exiled after accidentally revealing the identity of a key witness in the case against our antagonist, Rex Fury. He returns to LEGO City at the request of Mayor Gleeson to help investigate a crime she believes to be the work of Fury, as he has just escaped from prison. After the first hour or so of tutorial-based missions, you see the plot continue with a cliché cop movie storyline, with Chase going undercover working for various criminal organizations, always one obstacle away from catching your nemesis. The good news is that you won’t even notice how predictable the storyline is and you probably won’t care– you’ll be too distracted with how many awesome things there are within the city itself.

Some of these awesome things include said cannons for shooting out pigs you find, beaming down criminal aliens to arrest, parkour challenges, becoming a limo or taxi driver; the list goes on. This gives way to loads of game play-time aside from the missions themselves. About four hours into the game and I was only at 2.4% completion.

“The good news is that you won’t even notice how predictable the storyline is and you probably won’t care– you’ll be too distracted with how many awesome things there are within the city itself.”

Part of the charm of LEGO city undercover is its ability to reach out to all ages. There are tons of movie and television references– some subtle and some blatantly obvious– and the jokes range from making me laugh out loud like an idiot to something childish you’d see in the new Three Stooges movie. The game even makes fun of itself sometimes.

What I’m trying to get at is your entire family– children and elders– may find something they will want to laugh out loud about. 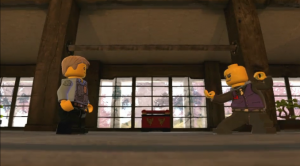 If you are familiar with the LEGO franchise then you know how everything in LEGO City Undercover works: Button mashing to break everything in sight, collecting studs, unlimited lives, and easy puzzles. LEGO City has all of that with a bit more. The fighting sequences follow a more timing based style, sort of like the Batman Arkham series. LEGO City is much simpler and easier to handle.

There is also another currency besides the good ol’ studs: Bricks. You can collect them by breaking things or if you need a bunch of them you can find “super bricks”, which can be worth up to 10,000. This new currency goes towards another new feature called Super Builds. You essentially build various objects around the city such as vehicle stations for you to use, statues, and even giant loop-de-loops to drive on. They are really satisfying to build and add a small sense of personal creativity to the game. You can’t really build things yourself but with super builds you feel as if you contribute some to the city. There are a total of 65 of them so happy hunting!

“There are LOTS of loading screens. What’s worse: the loading screens always play the same cheesy theme music, with an over-exaggerated bass line and action trumpets.”

Additionally, you have the added feature of the gamepad. In the game Chase is given a police communicator and (SURPRISE) it looks just like our Wii U gamepad. On your gamepad screen there is automatically a map, which is the default screen, but you continue to gain more features such as a super brick locator and a camera. If you are anything like me– someone who loves goofy and interactive gameplay features– it can really bring you into the game, making you feel like Chase himself. These features are unfortunately underused throughout the whole game.

What isn’t underused is cheesy Miami Vice-esque music. Oh, and loading screens. There are LOTS of loading screens. What’s worse: the loading screens always play the same cheesy theme music, with an over-exaggerated bass line and action trumpets. I will say that while the music throughout the game is fitting, the whole soundtrack is as cheesy as supersized nachos. Not to say cheesy isn’t good– it adds a child like charm to the atmosphere that is quite enjoyable– it’s just there isn’t enough variety to the musical themes played. The soundtrack isn’t something I’d ever listen to, unless I become a vice cop on the coast. 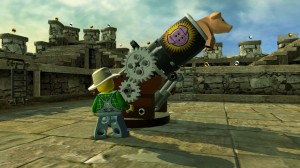 One thing they omitted that I can’t get myself to accept is the cooperative play. Part of the fun in the LEGO series was playing with a friend and helping each other solve puzzles, competing to see who could get the most studs and, of course, beating each other up. Having co-op in such a vast open world could lead to so many more possibilities.

But hey, with the variety of crazy characters, who needs friends, right? You’ve got your man-child sidekick Frank Honey, whose constant mistakes make you love him even more. He calls computers “compupers” for goodness sake! What’s not to love? You’ve also got the friends you make pretending to be a criminal like Vinnie Pappalardo, a Godfather wannabe who owns an ice cream parlor. And you can’t forget Blue Whittaker, who is voiced by a wonderful Morgan Freeman impersonator. That’s the key to these characters: they are brought to life perfectly by their voice actors. Each one has a distinct personality, whether original or an obvious movie reference, and you end up liking all of them, even the bad guys.

The bottom line…?
Balancing out the negative and positive aspects of LEGO City Undercover always seems to weigh in favor of the positive. As much as I love the licensed games such as LEGO Star Wars, LEGO City has way more to offer. Because of that, it serves as the perfect distraction while waiting for Mario or Pikmin. It has been my favorite experience with the LEGO franchise, and that’s saying a lot because they had LEGO Batman… 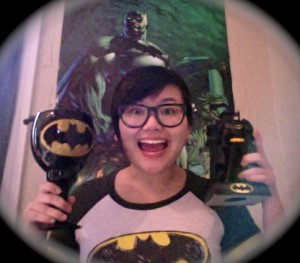 You enjoy charming and funny dialogue and aren’t bothered by easy puzzles. Also if you love collecting things in games like I do.

You like challenges and hate fetch quests. The latter is what this game consists of.

Any other LEGO franchise game I have played.

Want to reach Laura for some reason?