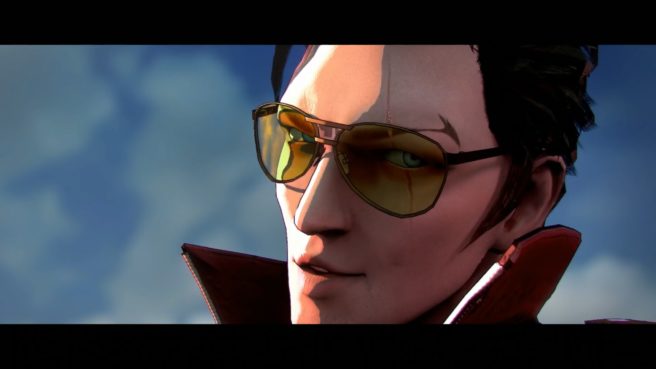 Grasshopper Manufacture has issued an official announcement for its new Switch game No More Heroes 3. Find the full press release below.

Grasshopper Manufacture has announced a 2020 release date for No More Heroes III, a brand new entry in the No More Heroes franchise exclusive to the Nintendo Switch, during Nintendo’s E3 2019 Nintendo Direct video presentation. Taking place ten years after the original No More Heroes, No More Heroes III follows Travis Touchdown as he returns to his former home of Santa Destroy. There he encounters a huge artificial metropolis floating in the sea, and a mysterious flying object high above the city. What crazy dangerous assassins will he have to face in this strange new world?

”After the Nintendo Switch unveiling conference in 2017, we released Travis Strikes Again this year, and now we are finally able to make the dream of No More Heroes III a reality,” says director Goichi Suda, or Suda51. “We’re working hard on development day in and day out to ensure that NMHIII goes above and beyond the expectations of all the fans who have been waiting for the game for so long, and we’re going to be rolling it out in 2020. May the Switch be with you!”

In addition to Robin Atkin Downes and Paula Tiso returning to their roles as Travis Touchdown and Sylvia Christel, No More Heroes III features an all-new original score composed by musician and actor Nobuaki Kaneko of the band RIZE.

No More Heroes III is scheduled for an exclusive Nintendo Switch release in 2020. Please stay tuned for more information.

Nobuaki Kaneko
No More Heroes III Lead Composer
Member (drummer) of rock band RIZE.
Started performing solo in 2009 under his own name, ‘Nobuaki Kaneko’. He has also proven his talent as an actor as well, performing in many popular movies, TV series, and commercials. Official site:http://kanekonobuaki.com/

Comments: I’m extremely fortunate to have this awesome opportunity! Let’s do this, Travis!

Comments: I’m really looking forward to voicing Travis again; the NMH players have always been incredibly supportive and kind when it comes to my voice work within the games, and I’m glad we can give them something new to sink their teeth into! The opportunity to work with both SUDA51 and Grasshopper again is very exciting, and I can’t wait for the game’s release next year, so everyone can see what we’ve been working on!

Comments: I’m thrilled to be reprising my role as Sylvia Christel for No More Heroes III. Sylvia has always been a favorite character of mine and I’m so excited to see what SUDA51 and Grasshopper are creating for the NMH community. It’s an honor to be part of this epic game, and I can’t wait til 2020 to share the fun with everyone!

Kozaki is a top creator who has worked not only in illustration and manga, but has also flexed his skills in character design for a wide variety of genres including anime and video games as well. His works have been highly praised both domestically and overseas. Some of his most notable character design work has been for the No More Heroes and Fire Emblem series, as well as Pokémon Go.

About Grasshopper Manufacture Inc.
Grasshopper Manufacture Inc. is a ‘video game band’ based in Tokyo, established in 1998 by award-winning game creator Goichi “Suda51” Suda. Widely known for creating and developing titles like Killer 7 and No More Heroes, Suda51 is famous for consistently creating imaginative and unique IPs that rarely conform to game industry standards. The universes Grasshopper creates constantly challenge, surprise and exceed the expectations of fans around the world.