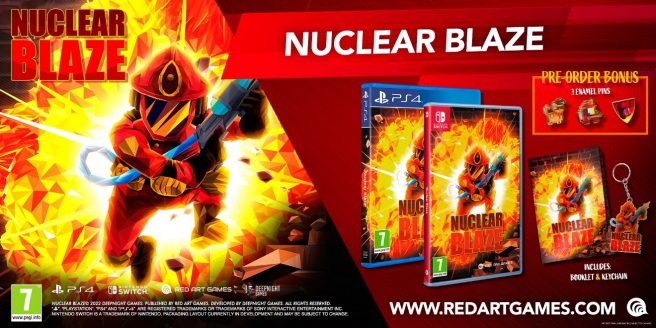 Nuclear Blaze will be sold both physically and digitally. All copies of the boxed version will include an exclusive keychain as well as a booklet, which contains an exclusive interview with Bénard. Those who reserve it on Red Art Games’ website will also be provided with three exclusive enamel pins.

Nuclear Blaze is a dynamic 2D Action game in which the player assumes the control of an experienced firefighter dropped in the middle of a massive fire. In addition to keeping the fire under control with his trusty hose, the hero must investigate the circumstances behind the catastrophe. To complete the perilous mission, the player can rely on smooth controls and tight gameplay mechanics crafted by Dead Cells’ lead designer Sébastien Bénard.

In addition to the game’s main mode, Nuclear Blaze also includes a special Kid Mode created with younger players (aged 3 and up) in mind. This mode has its own specific – and easier – levels, an immortal hero, simplified controls (with auto-aim) and tons of helicopters and trucks! Nuclear Blaze’s console version also includes the “Hold my Beer” Mode which adds hidden areas in all levels as well as new threats that require a more precise and tactical approach. On consoles, gamers will get the complete Nuclear Blaze experience!

A new trailer going along with the release date and physical announcement for Nuclear Blaze can be found below.