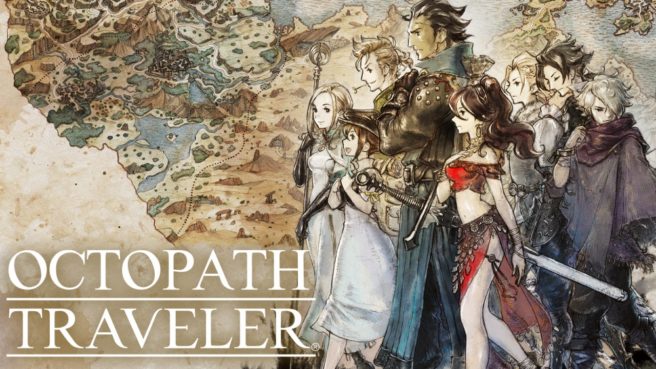 Octopath Traveler producer Masashi Takahashi and composer Yasunori Nishiki are both in attendance at Japan Expo this week. French site Jeuxvideo caught up with the two to learn more about the game.

Lelouch0612 provides the following details from the discussion:

– Both are 33 years old and grew up during the golden era of SNES JRPGs with the gameplay and visual style of the time (pixel-art)
– When Takahashi entered Square Enix, he wanted to do these kind of games but he was told that it was easier to develop more modern-looking games
– After years of hard and successful work, he was finally able to do the kind of projects he initially wanted to work on
– In terms of game mechanics, if Bravely was a spiritual successor of FFV, Octopath has been developed as a spiritual successor of FFVI
– Takahashi wanted to work on a new IP with a strong visual style that players would enjoy
– When the development of Octopath began, they made a demo exclusively in pixel-art
– They then realized that it was prettier in their memories and that’s why they decided to include modern effects with the Unreal Engine, especially lightning effects
– They feel that it is a good mix between both generations
– Nishiki-san grew up with games like Final Fantasy and the SaGa series; both franchises have influenced his work on Octopath
– He initially wondered whether he should try to adapt to the global audience or keep his own style
– He asked himself what Nobuo Uematsu (Final Fantasy) would do in the same situation and therefore he finally decided to keep his own style
– Octopath’s OST is influenced by his love of clasical music, he mentioned Bach, and movie musics
– The first demo has been downloaded 1,5 millions times
– People’s reactions to the demo were overwhelmingly positive, even more so in Europe than in Japan
– Their demo target was gamers in their 30s, 40s who were seeking the same great sensations they had during the Golden Era of JRPGs
– They felt that the Switch was the perfect platform for that with its ability to play 1 hour in bed before sleeping