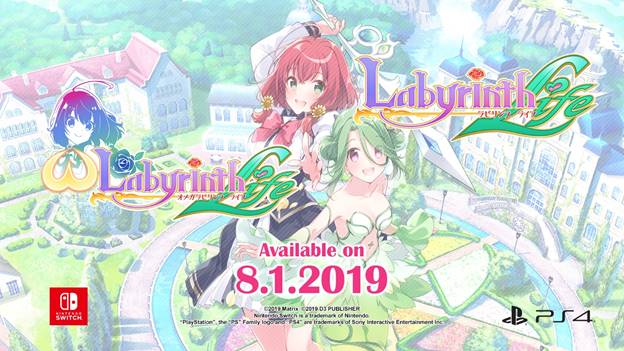 In a surprising bit of news, D3Publisher has announced that it will release the roguelike dungeon RPG Omega Labyrinth Life in the west. It’ll be out digitally in North America and Europe on August 1 – the same day as Japan. The western version will apparently launch without anything censored on Switch.

Here’s an overview of Omega Labyrinth Life, along with a trailer:

The story unfolds at Belles Fleurs Academy, a spacious school with a beautiful floral garden that holds a sacred flower of legend known as “Flora,” which radiates a mysterious power that is rumored to grant an everlasting bloom effect to the rest of the flowers in the garden. Suddenly, the everlasting bloom to the flowers in the garden wither away when maiden Hinata Akatsuki transfers to the Academy. Now, Hinata along with a new cast of stunning maidens from the academy, go off on an adventure, exploring a sacred dungeon in hopes of returning the garden back to its grandeur, and to fulfill their own hopes and dreams at Belles Fleurs Academy.

Both games will bring familiar roguelike JRPG turn-based mechanics like the previous Omega Labyrinth series in which maidens can grow their chest size by accumulating the mysterious Omega Power by defeating enemies in a procedurally generated dungeon with the risk of losing all of the player’s earned stats, items, and gear upon defeat.

– Tactical turn-based combat: Control and execute strategies between the maidens against various enemies in 2D dungeons
– Procedurally generated dungeons: Dungeon layouts and enemy placement are always randomized every playthrough, bursting with loot and challenges
– Maiden’s dream: Collect Omega Power by defeating enemies to grow maiden’s breasts up to Z-Cup
– Breast Burst Mode: Activate to double a maiden’s stats for a short period of time for tight situations against formidable enemies or enemy hordes
– Skill Bloom System: Unlock new skills, stats, and more with nectars found in the dungeon and academy that will reveal unique illustrations from each maiden
– Size up System: Squeeze and rub discovered item drops in dungeons between maiden’s breasts to reveal their potential to a maiden’s journey
– New Double Breast System: Change between maidens during a dungeon-crawl to utilize various skills and gain a tactical advantage to maneuver around enemies and obstacles
– Take a break in Slow Life: Enjoy life outside of fighting and dungeon crawling back at Belles Fleurs Academy by exploring the Garden Academy, chatting with other maidens, and managing the garden’s beautiful upkeep for collecting powerups and more

While Omega Labyrinth Life won’t be sold physically in the west, the overseas launch alone is newsworthy. For those who prefer physical copies, you can import the release from Asia with English support here.