Omen of Sorrow announced for Switch 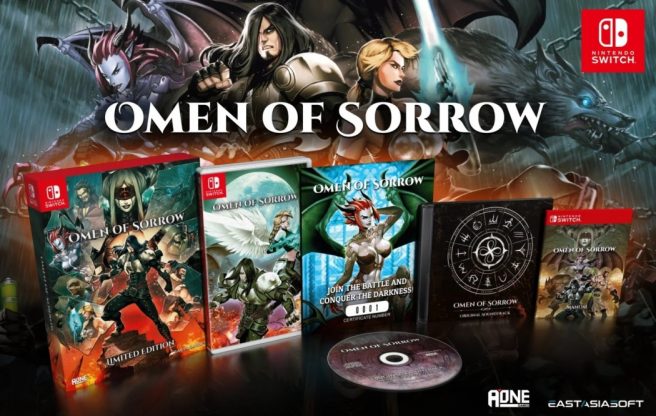 Today, publisher Eastasiasoft and developer AOne Game announced that the fighting game Omen of Sorrow is making the jump to Switch.

For the release on Nintendo’s console, the title will feature revised story mode content and new endings in arcade mode.

Since its original launch, Omen of Sorrow has become a cult hit with fighting game aficionados. AOne Games and Eastasiasoft Limited have focused on evolving that experience in order to bring a definitive revision to more players across multiple platforms and in more territories. Powered by Unreal Engine 4, Omen of Sorrow’s 2.5D brawling spans a multitude of detailed locations with handcrafted animations and cinematic finishers, all set to a masterful soundtrack by composer Francisco Cerda.

In a hidden underworld ruled by creatures of the night, a new terror has awakened! Omen of Sorrow brings monsters of horror, literature and mythology together for a fighting game experience unlike any other. Inspired by numerous arcade classics but offering its own unique innovations and mature aesthetics, Omen of Sorrow positively bleeds style! Featuring a roster inspired by such icons as Frankenstein’s monster and Egyptian high priest Imhotep, this traditional 4-button fighting game rewards or punishes players based on how aggressive their playstyle is, putting a skill-centric spin on combat while keeping the experience accessible to newcomers.

– Select from a varied roster of characters inspired by horror classics.
– Use cinematic finishers to take down opponents in style!
– Explore single-player modes against the CPU or challenge friends online.
– Strategize on the fly and turn the tide of battle through aggressive play!

We have a trailer for Omen of Sorrow below.

Omen of Sorrow will be sold both physically and digitally on Switch. Play-Asia will have the exclusive on the boxed version here, and pre-orders will kick off on February 24 at 7 AM PT / 10 AM ET / 3 PM in the UK / 4 PM in Europe.