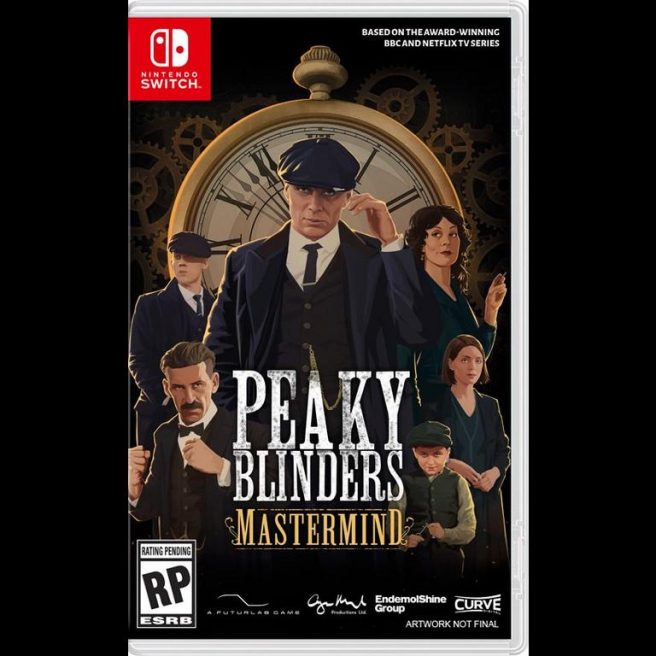 The puzzle-adventure game Peaky Blinders: Mastermind launched on Switch a few months ago, but only as a digital title. Now publisher Curve Digital has confirmed a physical release as well.

Peaky Blinders: Mastermind will be in stores starting December 4. That goes for both North America and Europe.

Peaky Blinders: Mastermind is a puzzle-adventure game, based on the multi-award-winning BBC and Netflix TV show.

Welcome to Birmingham, during the aftermath of the Great War. Set right before the events of Season One, Peaky Blinders: Mastermind lets you join the Shelby family’s criminal gang. Follow the rise of Tommy as he successfully uncovers a sinister plot to put the family out of business, proving himself worthy of being the true mastermind of the Peaky Blinders.

Mastermind refers to Tommy’s ability to plan complex scenarios in his head. As the player, you get to exercise this power by taking control of key members of the Shelby family including Tommy, Arthur, Polly and more. Become the Mastermind as you freely reset and rewind each character’s path in order to tune all of their actions for perfect coordination.

TRUE TO THE TV SHOW
Take control of Tommy, Arthur, Polly, John, Ada and Finn as they navigate through familiar locations including The Garrison Tavern, Charlie Strong’s Yard, Shelby Parlour and more.

THE RISE OF TOMMY
When a Peaky Blinder is implicated in the murder of a Chinese opium dealer, Tommy embarks on a mission to find out the truth, slowly growing into the true Peaky Blinders’ Mastermind.

BECOME THE MASTERMIND
Exercise Tommy’s power to plan complex scenarios in his head, by taking control of each key member of the Shelby family and perform their actions in parallel.

MANIPULATE TIME
Each character’s actions are automatically logged in a timeline which you can freely reset, fast-forward and rewind, until the plan is perfectly adjusted.”

STEALTH AND STRATEGY
Each mission is an increasingly complex puzzle to be solved undetected and on time. Choose the right characters and abilities to coordinate and execute the optimum plan.