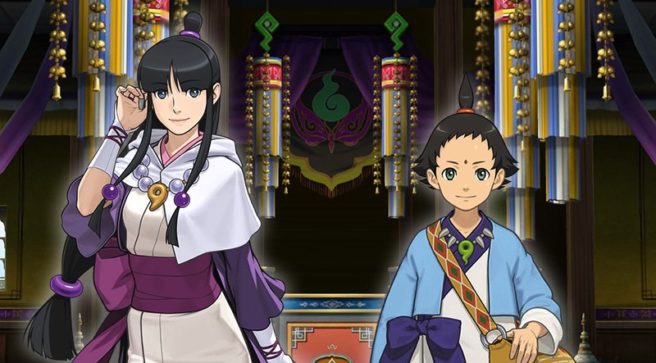 Find the full rundown on both characters below. For those that missed it, Phoenix and Rayfa’s profiles are here.

In the second of our series covering just some of the many characters in Phoenix Wright: Ace Attorney – Spirit of Justice, we take a break from our protagonist and newly introduced royal priestess Rayfa to focus on the return of Phoenix’s long-time friend, Spirit Medium (in training), and Ace Assistant, Maya Fey! We’ll also be discussing the capable (if not overzealous) new character Ahlbi Ur’gaid, a young monk who also works as a tour guide. Turns out these two have a bit more in common than one might think.

Maya made her first appearance in Phoenix Wright: Ace Attorney as part of a twisting and gloomy case that implicated Maya as a murder suspect. Despite Maya being initially accused of the crime – an accusation that Phoenix quickly clears after taking on Maya’s case himself – Maya soon joins forces with Phoenix to find the true murderer and bring them to justice. Following the sad circumstances that resulted in Phoenix and Maya inheriting the Fey & Co. Law Offices, Maya soon decided that she wanted to take on the role of Phoenix’s assistant. This new friendship born out of tragedy resulted in not only the offices being rebranded as the Wright & Co. Law Offices, but also helped lift Maya’s mood, soon bringing her back to her naturally cheery self. Maya’s unique ability to channel the spirits of the dead (which causes her physical appearance to change as a result), alongside her natural intuition and optimistic outlook, helped Phoenix through many of his early cases – though her channeling sometimes caused her more problems than it solved!

Eventually, Maya returned to her home in Kurain Village to continue her training as a Spirit Medium and perfect her usage of the Kurain Channeling Technique in order to become the eventual Master of the mystical art – though it seems that she kept in touch with Phoenix all the while. Leading up to the events of Spirit of Justice, Maya has spent the last two years in the Kingdom of Khura’in to increase her spiritual energy and complete her training so that she can be recognized as the head of Kurain Village – though it’s hard to tell if she’s been taking her training all that seriously. It is Maya, after all.

Despite the many years between when we last saw her and now, she really seems like the same old Maya – just as spirited, just as big of a fan of the Steel Samurai and other heroes of justice, and just as ready to take jabs at Phoenix’s hair every chance she gets. Despite all her training, it seems like she hasn’t changed in the slightest – right down to her love of hamburgers and getting into all kinds of trouble where Phoenix may need to offer his legal aid.

That’s at least one thing she has in common with Ahlbi Ur’gaid, a young monk who also works as a tour guide to show foreigners around the Kingdom of Khura’in. An industrious and energetic boy who loves to tell people about Khura’in with an eager “Allow me to explain,” Ahlbi puts everything he has into everything he does – particularly his highly detailed explanations of Khura’in’s history, which can take upwards of a few hours! More often than not, Phoenix has to put a stop to Ahlbi’s history lessons before they can get started, though it seems as though Ahlbi likes to talk about the places he showed “Miss Maya” during her time in the Kingdom of Khura’in, too.

Aside from showing foreigners the sights and greeting people with the traditional Khura’inese greeting “hap’piraki,” Ahlbi also carries around the tools of his trade in the gigantic bag he has on his shoulder, including a sweet cake known as a magatah’man, or “soul bun.” Seems like he offers it to everyone he shows around the Kingdom. I wonder what else is in that bag of his, anyways? H-hey… was it just me, or did it move just now?

It’s hard to believe that this earnest boy could harm anyone, which is why it’s such a shock when he’s accused of both the theft of his homeland’s holy relic and the murder of a guard at Tehm’pul Temple! Even so, when Phoenix jumps in to defend him, Ahlbi’s friendly attitude suddenly changes when he finds out Phoenix is a lawyer. It seems the people of Khura’in really do hate lawyers, but Ahlbi’s resistance to Phoenix’s help makes things that much more difficult. How do you defend someone who doesn’t seem to want you to defend them?