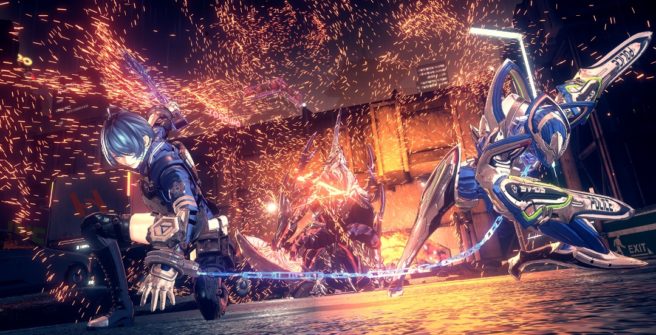 PlatinumGames has continued its Astral Chain developer blog series with yet another entry. For the latest addition, visual effects artist Takuo Yamamoto speaks about some of the techniques used in the game, such as how the world changes when using IRIS.

Here’s the full piece from Yamamoto:

Hello, everyone. I’m Takuo Yamamoto, visual effects artist for Astral Chain… and admittedly one of very few old-timers on a relatively young dev team! I’d like to take some time to tell you about what we tried to communicate with with the visual effects (VFX for short) in Astral Chain, as well as give you some concrete examples of how we achieved them.

But first, I’d better start off by introducing what we here at PlatinumGames consider most important in all our VFX. This is big-picture stuff that has an impact on the effects we put in all of our games, and of course Astral Chain is no exception. So what’s so important? Well…

Ta-dahh! That’s the main thing that PlatinumGames’ visual effects need to accomplish. That means taking full advantage of what the game’s visuals can offer to change along with players’ actions – Making it immediately visually clear what the player did and what happened as a result. VFX are purely visual, but they still have a huge impact on how it feels to control a character, or interact with stage mechanics. Good visual effects stir players’ feelings as they play.

The action in Astral Chain is built around the player controlling both the main character and the Legion, and that’s in addition to the usual situations you can expect from an action game. That means the visual effects for combat and action scenes have to be strong and easy to understand. We kept tweaking them and tweaking them as long as the schedule would allow to achieve those goals. (They also had to be nice and flashy – PlatinumGames has a reputation to uphold, after all…)

In action games, it’s essential for a player to be able to intuitively sense when they’ve defeated an enemy in the middle of a powerful attack or combo. Besides that, defeating enemies has to feel good, or else why would they want to keep doing it? So. How does one add “interactive exhilaration” to an enemy death effect?

In Astral Chain, we’ve followed the tried-and-true Platinum tradition of having the enemy stop moving the instant they’re defeated, then vividly burst, so the player knows they’re done for. This is important because combat is fast-paced and players will often face several enemies at once! Nobody wants to waste time beating a dead chimera.

With Astral Chain, we wanted the enemies to burst apart into particles in real-time when they were defeated. This sort of effect is popular in the tokusatsu hero TV shows that influence a lot of Astral Chain!

To briefly explain the process, in the moment a chimera dies, we enlist the help of the GPU to cover it in particles that match the color of the chimera under them. Since the chimeras in Astral Chain are made up of data, we made these particles into appropriately digital-looking shiny cubes. Just having chimeras crumble into a pile of cubes wouldn’t have enough visual impact for an action game, so we made some of them fall, while others violently scatter into the air, then tweaked the effect until it felt just right.

This is a visual effect used quite frequently in Astral Chain to show how chimeras warp and damage the world around them. This effect makes use of a technique called parallax mapping to make it look as if attacks or other damage are actually making dents in the scenery. That’s right – this is done with visual effects, not through a change in the 3D models themselves. Which means it can be used pretty much anywhere! We even stuck this effect on some enemy character models to make them look like cracks between dimensions were opening up all over their bodies.

At almost any time during the game, you can switch on an augmented reality tool called the IRIS to help with your police work. With an active IRIS, the world itself looks different. There are a lot of ways this radical change in appearance could have been handled, but because it looked complicated and challenging, naturally it got passed off to the VFX team to take care of. That’s the Platinum way!

When you flip on your IRIS, you’ll see…

… a noise effect flicker across the screen as it starts up
… a 3D grid fill the air around the your
… grid lines covering every geographical feature
… more grid lines running along the ground
… the hue and saturation of the entire world change
… outlines surround objects in the world, with differences based on how far away they are
… a silhouette around your player character, to make their shape stand out

That’s just a few of the many effects that went into defining how the IRIS looks in-game. There’s a lot at work here, some of which is hard to explain in writing, and it all has to happen smoothly and quickly enough to feel interactive and exhilarating.

I could go on and on about more visual effects that we put together to achieve that sense of interactive exhilaration throughout the game, but I think I’ve probably gone on long enough for now. Visual effects are finalized and implemented in the game fairly late in development, but they have a surprisingly large impact on the overall quality of Platinum’s games, in terms of both how they look and how they feel. I hope this devblog has shown you a bit of how they make that impact!

As I said at the very beginning, the Astral Chain development team is quote young – director Takahisa Taura included. Youth brings power, but we old-timers on the team fought hard to keep up, and everyone on the team, young and old, put a lot of passion and care into the game. I sincerely hope you play and enjoy it!