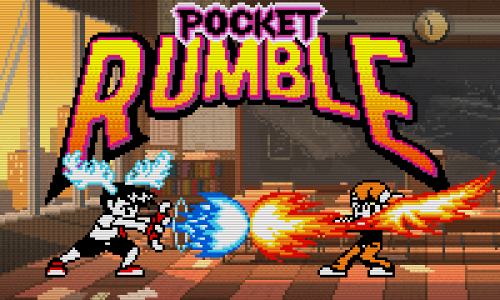 Nintendo UK recently published an interview with Christian Stewart from Cardboard Robot Games, developer of the upcoming Switch 2D retro fighting game Pocket Rumble, on their website. Make sure to read the full interview here if you’re interested; below are some interesting excerpts:

On why the game is designed like a Neo Geo Pocket Color game:

Two buttons was a big, big thing about Neo Geo Pocket. Somehow SNK got really complex, complicated fighting games that felt close to the Neo Geo arcade games in portable format, with two buttons. There was some magic there that we wanted to replicate in which we could make a game that has only two buttons, but still have the complexity that something like Street Fighter, with six buttons, could have.

On why the game is a natural fit for the Switch because of its local multiplayer capabilities:

Right, that’s exactly why we need to be on Nintendo Switch! This is the first time a handheld has really had the feel of playing on one console in local multiplayer. It’s perfect. We didn’t know anything about the Nintendo Switch when we were first designing the game but as soon as we heard about its capabilities we were like “this is perfect, this is exactly what we need to be on. This is a local, multiplayer, portable console and here we have this very important local multiplayer game that’s focussed on portability.” So it was a perfect fit!

On the challenges of making a game with the limitations of a Neo Geo Pocket Color-inspired art style:

The resolution of those sprites is very, very small. It is very hard to convey certain things. Subtle nuances are very difficult to convey at such a small resolution. It’s absolutely worth it, because I think the Neo Geo aesthetic on top of the nostalgia just complements what the game is trying to do very well.

We’re trying to get rid of a lot of executional barriers and keeping things to their bare fundamentals, but those fundamentals are still very complex because they’re the inherent mechanics of 2D fighting games.

We’re simplifying as much as we can. So those simple, lower resolution graphics and limited colour palettes work really well with how much we’re focussing on the core combat mechanics.