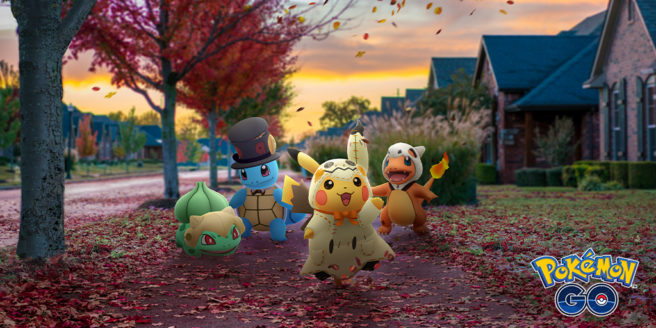 Pokemon GO will be celebrating Halloween with a new event. Beginning on October 17, players can rescue new Pokemon from Team GO Rocket, encounter Yamask, take on Darkrai in five-star raids, and more.

– Don’t be scared! More Ghost- and Dark-type Pokémon will be appearing in the wild, in Eggs, and in raids – Gastly, Murkrow, and more will be appearing. Making its Halloween debut is Yamask, the Spirit Pokémon!
– Pokémon wearing creepy-cute Halloween costumes arrive in raids and in the wild! — Some Pokémon have donned costumes to celebrate Halloween this year! Look forward to Bulbasaur wearing Shedinja costumes, Charmander wearing Cubone costumes, and Squirtle wearing Yamask costumes in raids. In the wild, be on the lookout for Pikachu wearing Mimikyu costumes! If you’re lucky, you might even encounter these alarmingly adorable Pokémon as Shiny Pokémon!
– The Pitch-Black Pokémon makes its ominous debut in Pokémon GO! Darkrai will be appearing in five-star raids!
– Frightful and fun Field Research tasks will be available for a limited time during this event.
– You’ve received a spooky message. Check out your Special Research when the Halloween event begins, Trainer, and you might face a Forbidden Pokémon…