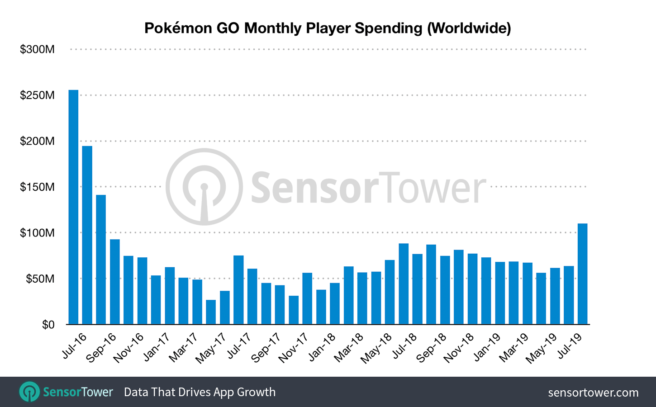 Sensor Tower has a new report on Pokemon GO’s strong performance in August. According to the site, the arrival of Team Rocket and more led to total revenue of $110 million. That’s the best month for Pokemon GO in three years.

Here are some other highlights from the report:

– 44 percent year-over-year increase in revenue
– Up from the $76.6 million grossed by the title in July 2018
– 76 percent month-over-month increase from $63.5 million spent by players in July
– August was Pokémon GO’s fourth highest earning month on record
– Best month since September 2016
– It has only earned more in July, August, and September 2016 when it grossed $256 million, $195 million, and $141 million, respectively
– The largest portion of spending in the title last month came from the United States (40 percent / $44 million)
– Japan was a close second (31 percent / $34 million)
– Japan is still the game’s best monetized market with an all-time average revenue per download of $45
– In comparison, the U.S. sits at approximately $10
– New user growth increased a more modest 10 percent year-over-year
– Close to 5.7 users installed the title for the first time in August across the App Store and Google Play, compared to 5.2 million one year ago
– Pokemon GO was the fourth highest earning mobile game globally last month after Honor of Kings, Fate/Grand Order, and PUBG Mobile, which grossed $141 million, $159 million, and $160 million, respectively, not including third-party Android stores in China