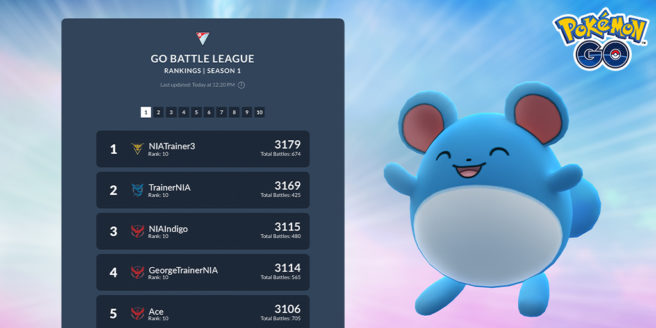 Niantic have announced that Pokémon GO will be receiving a leaderboard for its Battle League PvP mode tomorrow, along with an event centred around Marill titled ‘GO Battle Day: Marill’ taking place on Sunday, April 12th 2020.

Here’s what you can expect from the GO Battle League leaderboard.

It will show the top five hundred Trainers in the world and their Trainer nicknames, teams, ranks, ratings, and total matches.
Rankings are based on the previous day’s in-game ratings for Trainers rank 7 and up. The leaderboard is scheduled to update between approximately 8:00 p.m. UTC and 10:00 p.m. UTC every day. (Note that leaderboard updates may be delayed by things such as maintenance.)
Trainers with active disciplinary action or inappropriate Trainer nicknames will be excluded without prior notice.
Celebrate the launch of the GO Battle League leaderboards with GO Battle Day: Marill on Sunday, April 12, 2020! This brand-new event will feature Marill, the Aqua Mouse Pokémon, and activities related to the GO Battle League. This Water- and Fairy-type Pokémon evolves into Azumarill—a popular Pokémon in the Great League!