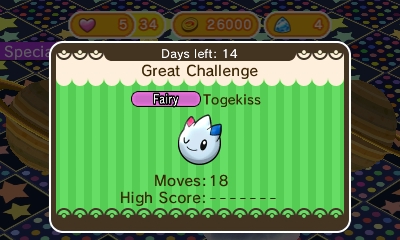 It’s time, yet again, for Pokemon Shuffle’s update. This update adds more Mission Cards (#14-16) to the game. The temporary Special stages feature brand-new levels for Togekiss (Winking) and Feraligatr have begun, as well as repeats for Palkia, Bellossom, and Kabutops, all running until October 18. A repeat run of Thundurus Incarnate has also begun, which can be played once a day until October 11.

Finally, next week’s update will bring the next Mega Competition: Mega Pidgeot. If you want to be one of the very best and get your hands on some Pidgeotite, better start training!