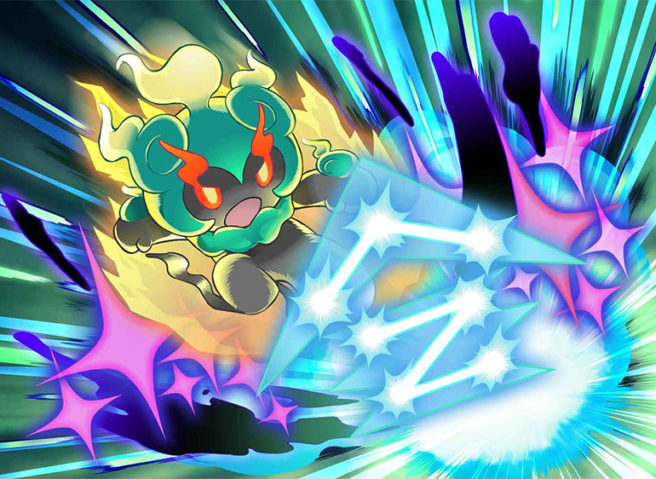 The Pokemon Sun/Moon website has updated with full details on Marshadow. That’s posted below, along with an English equivalent of yesterday’s video clip.

Known as the Gloomdweller Pokémon, the Mythical Pokémon Marshadow conceals itself in the shadows. It never appears before humans, so its very existence is the stuff of myth. Marshadow sinks into the shadows of others, and is able to copy their movements and power.

Marshadow is a very cautious Pokémon. It sinks into shadows and observes what is going on around it in such a way that no one else will notice it. This may be the reason why is so rarely seen.

Among the numerous Pokémon discovered to date, Marshadow is remarkably the first to combine Fighting type and Ghost type. Even regarding its types, Marshadow is an extremely rare Pokémon. Fighting-type Pokémon are usually ill-suited in battle against Psychic-type Pokémon, but now you’ll be able to take advantage of Marshadow’s Ghost type to battle effectively!

When Marshadow unleashes moves, it turns green! When standing up to enemies with its full power, such as when unleashing moves, parts of Marshadow’s body turn green, thanks to its burning fighting spirit.

Spectral Thief is a new move that only Marshadow can learn. This move steals any stat boosts that the target had, and then deals an attack. It’s a powerful physical move with a never-before-seen and surprising effect. Change a crisis into a chance, and victory is within your grasp!

Marshadow also has a signature Z-Move! Soul-Stealing 7-Star Strike is a special Z-Move that can be used by a Marshadow that knows Spectral Thief and is holding the special Z-Crystal Marshadium Z, which cannot be obtained through regular gameplay.

A Z-Powered Marshadow leaps out of its Trainer’s shadow and unleashes its full force on an opponent with a flurry of punches and kicks with this powerful Z-Move! Check back for details on how to get Marshadow and its powerful Z-Crystal Marshadium Z!

More of Marshadow’s secrets revealed in #PokemonSunMoon! This Mythical Pokémon is the first Fighting and Ghost type: https://t.co/NEXNphp1cH pic.twitter.com/P5zvBT8O9U