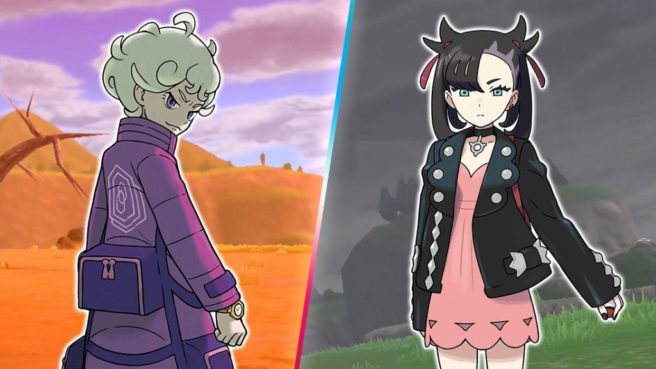 The Pokemon Company has shared an official announcement covering all of today’s Sword/Shield news. We have the full rundown on Galarian Pokemon, new Pokemon in general, rivals, and more.

The Pokémon Company International and Nintendo revealed details today about the regional forms of Pokémon found in the highly anticipated upcoming Pokémon Sword and Pokémon Shield video games. New Pokémon Evolutions and information about the rivals that Trainers will face were also revealed. Pokémon Sword and Pokémon Shield launch November 15, 2019, exclusively on the Nintendo Switch™ system.

Galarian Pokémon
Some Pokémon have adapted to the unique environment of one specific region and do not look or behave like Pokémon of the same species found elsewhere. Regional forms of Pokémon can be found in Galar as well, where they’re known as Galarian forms.

Galarian Weezing consumes polluted air and poisonous gases for sustenance. The by-product of this consumption is purified air, which is spewed out from the tops of its heads. The toxins accumulated within Weezing’s body form into concentrated poison gas clouds that leak out and drift around it. This gas is so potent that even a whiff is enough to stun and immobilize an opponent, making it Weezing’s best weapon during battles.

The Zigzagoon of Galar never settle down and are known to inhabit all areas of the region, including fields, forests, and towns. There is some speculation that the zigzag movements of the Zigzagoon in other regions stem from the restless nature of Galarian Zigzagoon, considered to be the oldest branch of the species. Galarian Zigzagoon enjoy battles and will charge at people and other Pokémon in an attempt to provoke a fight. This behavior usually succeeds in starting a battle with other Pokémon, but humans tend to think Galarian Zigzagoon is just playing or showing affection.

Galarian Linoone can reach speeds of over 60 miles per hour and can deliver devastating Tackles and Headbutts. With enough destructive force to knock away a car, these attacks can also throw Linoone off-balance if they miss. Galarian Linoone are rash and fearless and will recklessly pick fights even with opponents stronger than themselves. Their boldness and their tendency to attack opponents head on make Galarian Linoone very popular among the disaffected youth of the Galar region.

Galarian Form Evolutions
Living in the unique environment of the Galar region, some regional forms of Pokémon have developed unique Evolutions unseen in any other region.

The Linoone of the Galar region live in harsh conditions and engage in fierce competition with others of their species. As a result, their survival instincts have been honed, leading to their Evolution into Obstagoon. Though Obstagoon is extremely combative, it often does not launch the first attack. It will taunt an opponent, goading it into attacking. When it does, Obstagoon will cross its arms and meet the oncoming attack with its Obstruct move. Obstagoon is especially skilled at throwing its opponents off guard and counterattacking with its sharp claws.

Form-Changing Pokémon
Some Pokémon can change their form, often because of the effects of certain items or their own Ability. Some of these form changes don’t just change the Pokémon’s appearance but also affect the types of its moves or even change its Ability.

The sacs in Morpeko’s cheeks constantly generate electricity. This consumes energy, causing Morpeko to be constantly hungry. To satisfy this hunger, Morpeko always carries around Berry seeds to snack on. When experiencing prolonged hunger, Morpeko’s hormone balance changes. This causes its fur to change colors and triggers more aggressive and volatile behavior. The energy stored in its cheek sacs also changes from Electric type to Dark type. Morpeko’s Ability, Hunger Switch, is a new Ability that causes it to change its appearance each turn. Aura Wheel is Morpeko’s signature move, and it changes type depending on Morpeko’s form. In Full Belly Mode, the move is Electric type. In Hangry Mode, the move becomes Dark type.

Rivals of the Galar Region
Many Trainers from across the region take part in the Gym Challenge, a competition in which participants face the various Gyms of Galar with the hopes of becoming the Champion. Two rivals that Trainers will compete with on their adventures are Marnie and Bede.

Marnie
Marnie is a rival who has a competitive side, and together with her partner Morpeko, she aims to become the Champion of the Galar region. She has many passionate fans due to her calm and calculated battle strategies.

Bede
Bede is a rival who is skilled at Pokémon battles and has the pride to match. He has joined the Gym Challenge, having received his endorsement from Rose, the chairman of the Galar Pokémon League. While he clearly is aiming to become Champion, he seems to have other objectives as well.

Team Yell
Team Yell is a group of troublemakers who seem to appear everywhere and who attempt to get in the way at every opportunity. They want nothing more than for Marnie to become Champion, so they try to obstruct other challengers. They take over hotel lobbies, prevent challengers from accessing transportation, and even shout and distract opponents during battle. Whenever Marnie battles, these Team Yell Grunts are quick to appear,showing their support with Marnie-print towels and horns.

Poké Jobs Help Pokémon Grow
In the Galar region, people and Pokémon often work together. Corporations and universities request the help of Pokémon through Poké Jobs. Trainers can check for available Poké Jobs at the Rotomi in Pokémon Centers and will be able send Pokémon directly from their Boxes to any job they accept. Trainers will find that certain Pokémon types are suited for specific jobs. The experience gained while on the job will help Pokémon grow, and Trainers may even receive rare items as rewards.