Posted on September 1, 2021 by Brian(@NE_Brian) in Mobile, News, Switch eShop 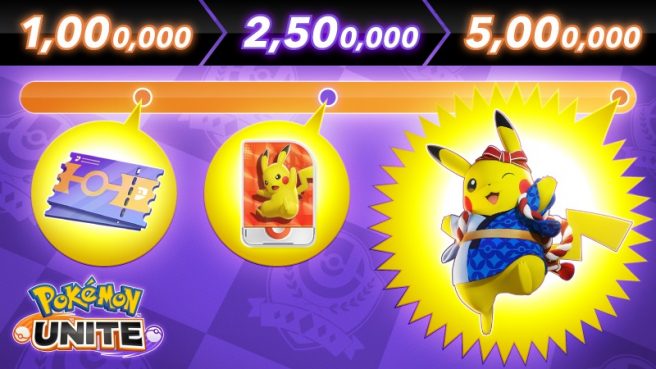 Due to the success of the pre-launch campaign for the mobile version of Pokemon Unite, fans have unlocked a number of rewards, including Aeos Tickets and Pikachu Holowear.

The campaign started ahead of the game’s debut on iOS and Android this month. Once pre-registrations reached 1,000,000, players unlocked 1,000 Aeos Tickets in Pokemon Unite. The next target was 2,500,000 for a a Pikachu Unite license. Then at 5,000,000, Holowear-Festival Style: Pikachu would be available. The Pokemon Company has now confirmed that each of these goals have been met.

Due to the success of the campaign, it looks like additional rewards will be added with more goals coming into the picture. The Pokemon Company says that at 7.5 million pre-registrations, an additional 1000 Aeos Tickets will be unlocked. We’ll let you know about any other notable rewards going forward.

Note that you’ll be able to claim the license and Pikachu Holowear by logging in to the mobile version of Pokemon Unite and completing the log-in event by October 31, 2021, at 7:59 AM PT / 10:59 AM ET. If you already have the license, you’ll be given Aeos coins instead.

Pokemon Unite launches for mobile on iOS and Android beginning September 22. The Switch version is already available having previously launched on July 21.