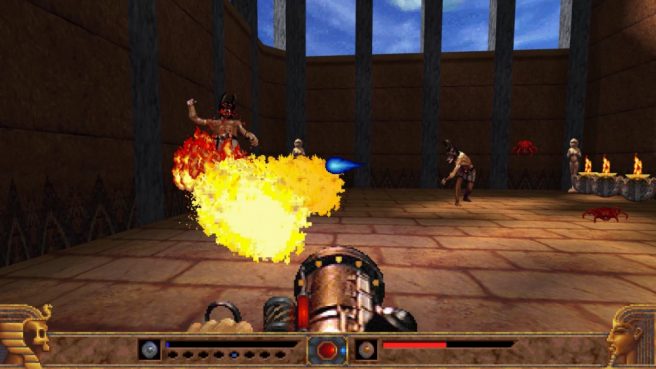 Gameplay has come in for PowerSlave Exhumed, a redone version of the classic first-person shooter. We have just under a half hour of footage.

Learn more about PowerSlave Exhumed with the following overview:

– First Person Viewpoint Action
– 20 Plus Levels of Non-stop gameplay through an ancient Egyptian city and the tomb of the Pharaoh Ramses
– Real time fully 3D rendered gameplay allows you to move between floors within a single level
– Cross bridges and swim through underwater grottos
– With just a machete to start, search for 6 other weapons including hand grenades, a flame thrower, an M-60 machine gun, and a magical cobra staff.
– Dynamic lighting creates stunning visual effects

Check out the gameplay for PowerSlave Exhumed on Switch below.

PowerSlave Exhumed can be purchased digitally on the Switch eShop. It has support for English, Spanish, French, German, and Italian language options.