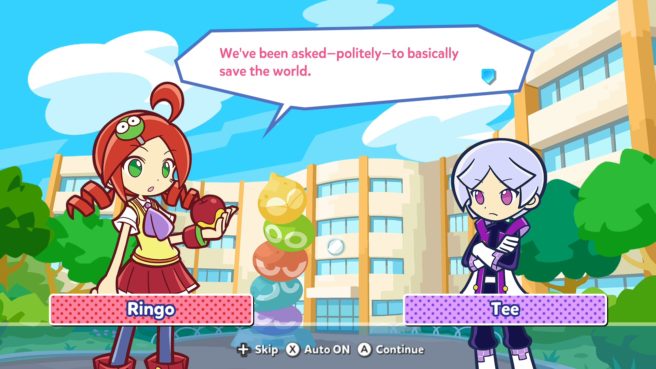 During PAX Online today, SEGA unveiled new information about Puyo Puyo Tetris 2. Specifically, we have an update on the game’s Adventure Mode.

Adventure Mode will feature the return of characters Ringo, Tee, and more “as they embark on a colorful journey.” As part of the story, “players will navigate a new map, experience special mission conditions and test their skills in Skill Battles for a whole new layer of gameplay”.

Here’s some additional information about Adventure Mode, along with a trailer:

Reunite with Ringo, Tee, and a lovable cast of returning and new characters from Puyo Puyo Tetris for a new journey! The worlds of Puyo Puyo and Tetris have merged thanks to a mysteriously powerful being known as the Dimensional Parasite. With this threat looming, Ringo, Tee, and friends must traverse the world to pop Puyos and clear Tetriminos to rescue their pals from a dark corruption. But they’ll quickly learn that there’s more to their quest than meets the eye when they face the Dimensional Parasite, with new mysteries and clues to uncover as their out-of-this-world journey unfolds.

As a reunion of two puzzle legends, Puyo Puyo Tetris 2 features a brand-new story that brings together the game’s vibrant cast and various gameplay modes for players to explore. With a new overworld map to navigate, new special mission conditions, and a progression system during the new Skill Battles, Adventure Mode brings a whole new layer of depth to the game’s campaign.

Unlockables: Players will unlock Item Cards that give special abilities and options in Skill Battle, key to winning matches in the new Skill Battle mode. New playable characters, backgrounds, bonus stages, and more can be unlocked by players as they progress through Adventure mode while they earn credits to spend on even more cool things in the in-game shop!