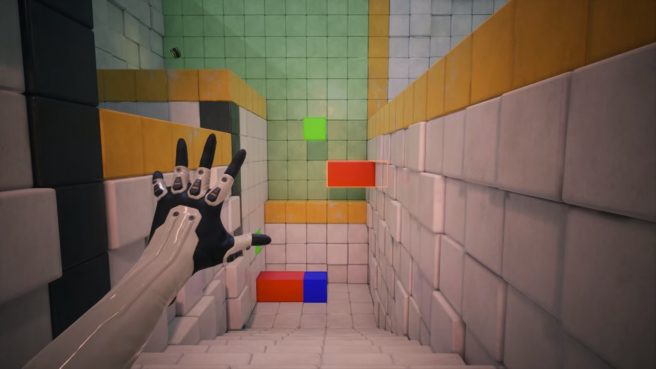 Those that are interested in getting a closer look at Q.U.B.E. 10th Anniversary can check out new gameplay. Following the initial announcement in June, it just landed on Switch this week.

Serving as the ultimate celebration of a decade’s worth of brain-twisting first-person action, Q.U.B.E. 10th Anniversary adds refined visuals, completely redesigned and revised gameplay sections, and a whole new chapter to a fresh take on the classic puzzler entirely rebuilt from the ground up.

The new chapter – dubbed Sector 8 – offers an additional 4-6 hours of gameplay, adding fresh content to an anniversary edition that will also allow players to take on either the original 2012 version of the game, or 2014’s Director’s Cut complete with its voice-over narrative and revised soundtrack – both with Q.U.B.E. 10th Anniversary’s stunning new visuals.

– Q.U.B.E. – The original – The 2012 version of the game with improved visuals, new puzzles and gameplay tweaks from player feedback.
– Q.U.B.E. Director’s Cut – The 2014 version of the game with a voice-over narrative and revised soundtrack.
– Over 100 puzzles to complete across 8 levels
– Sector 8 – A whole new chapter to the game, unlocked after completing the campaign. This provides 4-6 hours of brand new puzzle gameplay
– Fresh visuals, with the game entirely rebuilt from the ground up
– 46 Collectibles to track down across 8 levels
– Full colour blind support, using symbols as a colour aid
– Brand New Developer Commentary – The dev team reminisces about how they made the game.
– Assorted Extras – Screenshots, concept art, and other trinkets from the making of the game.

Have a look at the gameplay for Q.U.B.E. 10th Anniversary on Switch below.