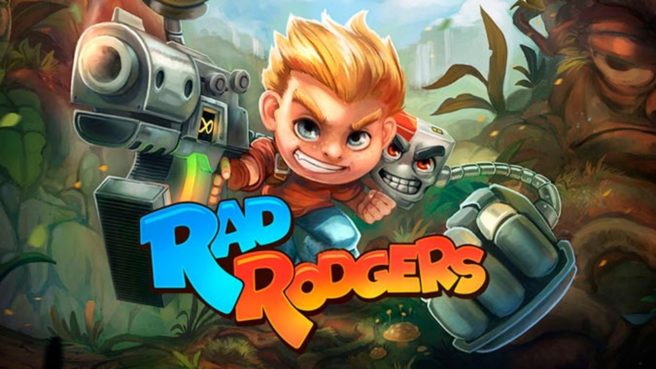 Rad Rodgers was first thought to be coming to Switch after it was listed on GameFly. That retailer page has since been removed, but we have more evidence that it’s happening.

The ESRB just rated Rad Rodgers for Switch this week. Now that the classification is secured, we could be seeing it sooner rather than later. THQ Nordic may have an announcement very soon as well.

For those who missed our previous coverage, here’s what you can expect from the action-platformer:

Weapons: Dusty arms Rad with a variety of radical bad-ass weaponry. The Bolt Blaster has unlimited ammo, is easy to use, and more than enough firepower to get the job done. The Phoenix Cannon shoots out a fiery bird whose wingspan lights enemies ablaze as it flies by. There are 5+ weapons in this first chapter, with more to come.

Sounds & Music: Our composer Andrew Hulshult combined his years of musical experience (both performing and writing) with his passion for retro-style gaming to create an amazing and authentic soundtrack for the game complete with MIDI-inspired music… And synthesizers!

The Pixelverse: While Rad and Dusty are a great team, only Dusty can enter the electrified Pixelverse — a dangerous spacetime-breaking region that exists behind the game world. Dusty enters the Pixelverse when necessary to repair glitches in the running game world, allowing both Rad & Dusty to continue their journey.