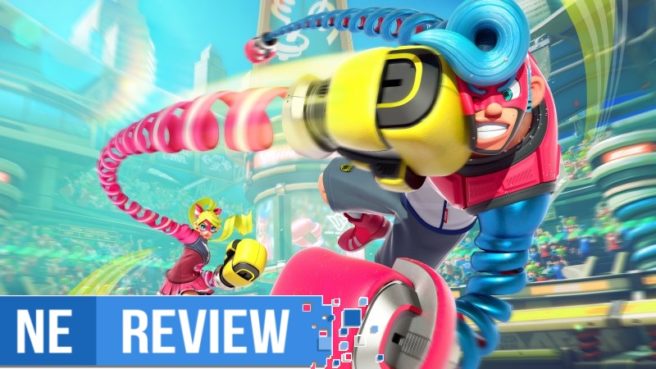 It feels commonplace with Nintendo to expect at least one new first-party IP to follow the most recent console launch. Enter ARMS, Nintendo’s latest original game, and their take on a more competitive-styled fighter. Nintendo has had experience with the fighting game genre in the past with the Smash Bros. series, but instead of leaning more towards the party-style that has been the intended main focus Smash Bros., ARMS seems to lend itself to a more competitive one-on-one style of fighting game in the vein of Street Fighter or Mortal Kombat while still maintaining the big N’s signature twist on a traditional genre.

The fighting in ARMS plays out in a sort of arena, with the camera positioned behind the character’s back and is always locked on to an opponent. What makes ARMS stand apart from other fighting games is all in the name. All characters wield long, extendable arms that can stretch across the playing field to strike the opponent. To add more variety, each character’s arms can be topped with a variety of different gloves. All of the unlockable gloves come with its own fighting style and attribute. Some arms resemble boxing gloves whose punches fire straight until they’re curved, while other arms resemble things like boomerangs, hammers, shields, or missile launchers. On top of the weapon variety, each arm comes with one of seven attributes that are used to impede the opponent in some way like fire that inflicts additional damage. This leads to a multitude of different combinations as all ten current fighters can be equipped with any of the thirty different gloves, provided they’ve been unlocked for that character.

ARMS’ gameplay has elements of old-school fighters blended with new aspects that keep it fresh and engaging. The objective of each fight is to take the opponents health down to zero through the use of punches and grabs. Fighters can block incoming attacks, allowing for their arms to become charged, activating their arms special attribute in the process. Charging your arms is essential to winning matches, as the added attributes each fighter has change the strategy needed in order to win. In addition to charging punches, each character has a special Rush meter that, when filled, allows the player to unleash a flurry of punches that can turn the tide of battle in an instant, but can be negated altogether with a well-timed block. 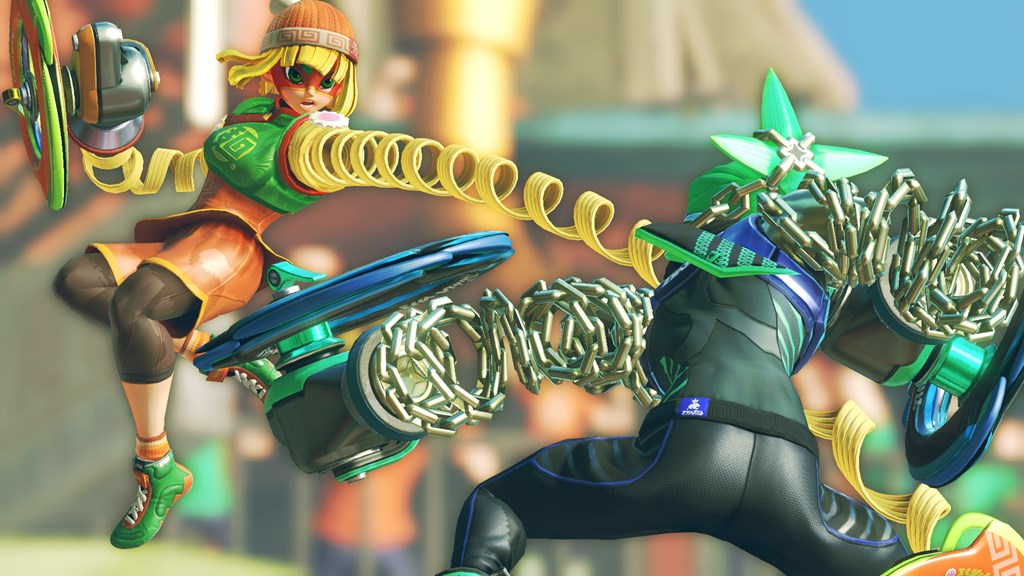 Along with charging your punches, another key aspect of winning matches is maneuvering around the opponent effectively. On the ground, most characters’ movement speed is fairly slow, but each character is able to dodge and jump forwards, backwards, and side to side. Combining dodging and jumping is essential to avoiding punches and grabs and entering opponent’s blind spots to rack up the most damage possible. A winning strategy boils down to predicting your opponent’s movements, avoiding or countering the opponent’s punches, grabs, and blocks, and using a fighter’s unique characteristics and their chosen arms to the best of their ability.

At ARMS’ best, all of these elements combined lead to tense fights that require plenty of thought and strategy. On the other hand, matches can be won by some amount of luck and weapon choice, as some arms tend to outshine others depending on their type and attribute, especially when it comes to the special rush attack. Moments like these can lead to frustration, but can usually be overcome with patience, planning, and waiting for the opponent to slip up or overextend.

As mentioned earlier, the ten playable fighters in ARMS also come with their own unique quirks and attributes. These include characters like Min-Min, whose dodges cause her to perform a kick that blocks incoming punches, or Master Mummy who doesn’t flinch from weaker attacks and can heal by blocking. The ten playable fighters currently in ARMS are one of its strongest aspects. The roster’s design all incorporate some form of stretchy or extendable substance that gives some sort of context for their strange looking arms. Min-Min works at her parent’s ramen shop, so her arms are made of ramen adorned with Japanese fish cakes, with her knit cap resembling a ramen bowl. Helix, the man-made fighter, uses twisting DNA strands as his arms and can stretch his body to avoid attacks. Every fighter has some aspect that sets them apart from each other, in both design and playstyle. However, while their designs are fantastic and unique, the characters’ personalities never really get a chance to capitalize of off them. Each one ends up feeling very two-dimensional with only their specific abilities setting them apart from one another. This stems from something that ARMS falls short in, which leads into a discussion of its playable modes. 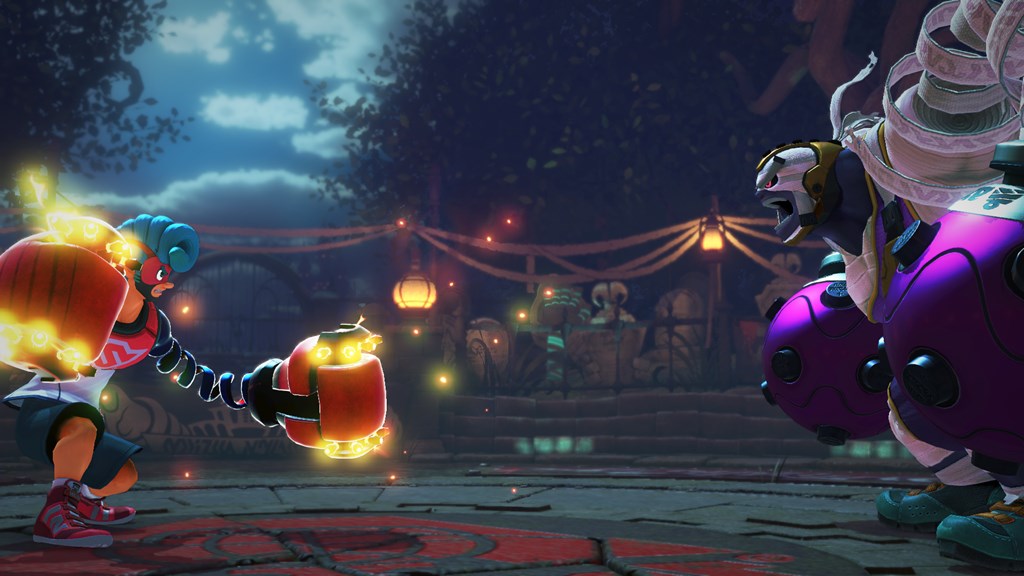 It’s safe to say that one of ARMS’ weakest areas is its single-player modes, specifically Grand Prix. Grand Prix is the closest thing ARMS has to a campaign, and has the player choosing a specific fighter to climb the ranks and take the title belt from the reigning champion. One of the main problems with this mode is its repetitiveness. There are always one or two standard fights to begin with, then either a volleyball, hoops, or skillshot match that usually comes around in the third and sixth match, then more fights until you fight one of two bosses depending on the difficulty level you choose. The format becomes monotonous and predictable after the first few times through, as every fighter you encounter is fought on their home stages leaving little variety in stage and character match ups. Even the dialogue provided by the announcer, Biff, is the same each time through, resulting in skipping it as fast as possible to move on to the next fight. The only aspects that break the monotony in some way are the special fights like volleyball or hoops and the difficulty setting you choose.

Yet, these aspects only dig Grand Prix mode into a deeper pit. Special matches like skillshot and volleyball end up feeling very luck-based and can lead to multiple defeats that feel out of the players control. This, coupled with the difficulty setting leads to further frustration, as I found there was a very significant difficulty spike beginning with level three of the seven difficulty levels offered. However, it wasn’t just that the opponents required more strategy and planning to take down; the AI felt as though it was predicting my moves before I had even made them. By level four, the middle difficulty, it became near impossible to land any rush attacks on the opponent as they would always end up blocking them for their entire duration no matter how I approached. In some cases, the second match of a Grand Prix would be far longer and more difficult than even the championship fight due to multiple game-overs from AI opponents that I couldn’t land a single hit on, until I eventually managed a victory through a series of exploitative grabs or stun-locks by using the shock attribute that disables an opponent’s arms.