[Review] BAFL: Breaks Are For Losers 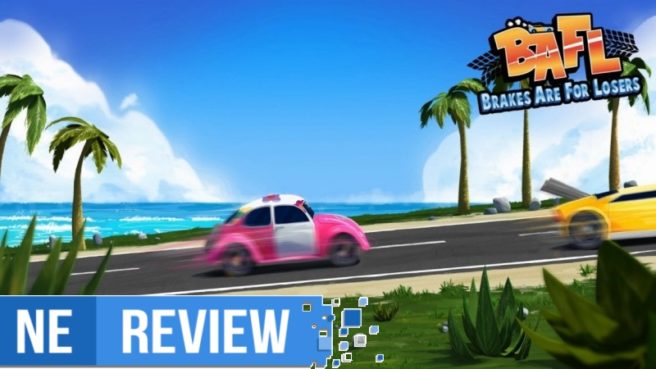 BAFL: Breaks Are For Losers is a title that strives to deliver classic “old school arcade racing games” vibes on the portable system we’ve all come to love. After previously appearing on Steam, it seemed like more than a fitting enough release to be added to the Switch’s library. But does BAFL successfully capture the rush and fun of classing old school racing games, or is it actually just something for the losers?

Playing BAFL is an incredibly simple task. Races happen on short tracks that take mere seconds to loop, and you navigate a very loose and out of control kart that you have to maneuver sharp turns and time boosts in such a way to overlap your rivals in stay in the front of the pack. Just like classic racing games, there are other racers flopping around and using items that spawn to create mayhem and challenge you. It sounds good on paper – but there’s this thing: it’s just not fun.

Controlling the karts is one of the gimmicks of BAFL because, as just like the title implies, brakes are for absolute losers, which means there is absolutely none of that here. Your vehicle moves without input, so all you control is your boosts and turning (and honking). Also, cars move so, so fast, and combined with no breaks, there’s a lot of slamming into walls, hitting other karts, and turning yourself backwards. Additionally, this game has such a visual style that makes keeping track of your controlled kart more difficult than it should be, as the dark colors of your karts blend so well with the dark track and those contrast with the bright environment outside of the track to make it all one big visual cluster that doesn’t work too well. There were plenty of occasions in which I found myself, among the mayhem on screen, losing my cart for just a few seconds and seeing that I’m hurdling backwards and leaving a victory practically erased from possibility. 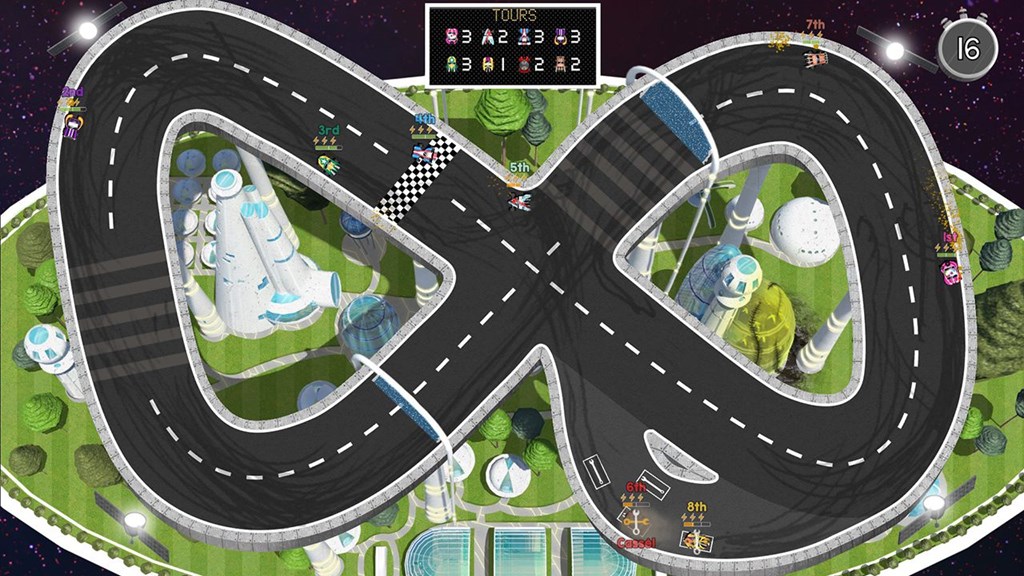 To make matters worse, every time you hit a wall or kart, you lose a little bit of your health, and when that’s all depleted, you will stall. So expect to be stalled almost as often as you’re actually driving. There are items that occasionally appear on a track that can be used to either give you a boost or hinder your other racers, but among the visual craziness of the races, that’s already present, and it’s far too easy to miss these completely. Additionally, there are pit stops located near the lap of every track. They’re off the beaten path and take a bit of time to repair your damage, and while trying to curve your path to make it to these was probably the most fun I had when looping around these tracks, more often than not I found them mostly useless as using them takes just as long as actually being stalled out.

From the second you start the game you’re immediately inside the hub world and being given the option of “Challenges” and “Races”. The former option only presents you with the small handful of tracks and you can either race for a best time, against your ghost, or play a mode where you run the tracks attempting to go the longest without hitting the walls. The latter of those actually captured my attention longer than any other mode in this area, but if only still for a few minutes. On the other side of the hub, you can take on a quick race or custom race, or compete in the elusive Championship mode. The final thing in the hub you get to do is change your karts look from a few preset options, but there’s only nine, and none of them are very standout.

All of these are provided the option of possible play with up to seven other players, but if you had to force your friends onto a few runs around BAFL’s tracks, Championship is the way to go. You’ll race around each of the tracks (sometimes repeating the same track three times in one Prix) a total of ten times, and have your total laps come together and be collected by the end to crown the winner. In this mode you collect coins based on your successes and can use those to upgrade little things about how your car controls. This has the makings to be fun, though sadly the improvements aren’t drastic enough to make a big enough change and playing so many consecutive races really can take a toll on a person. 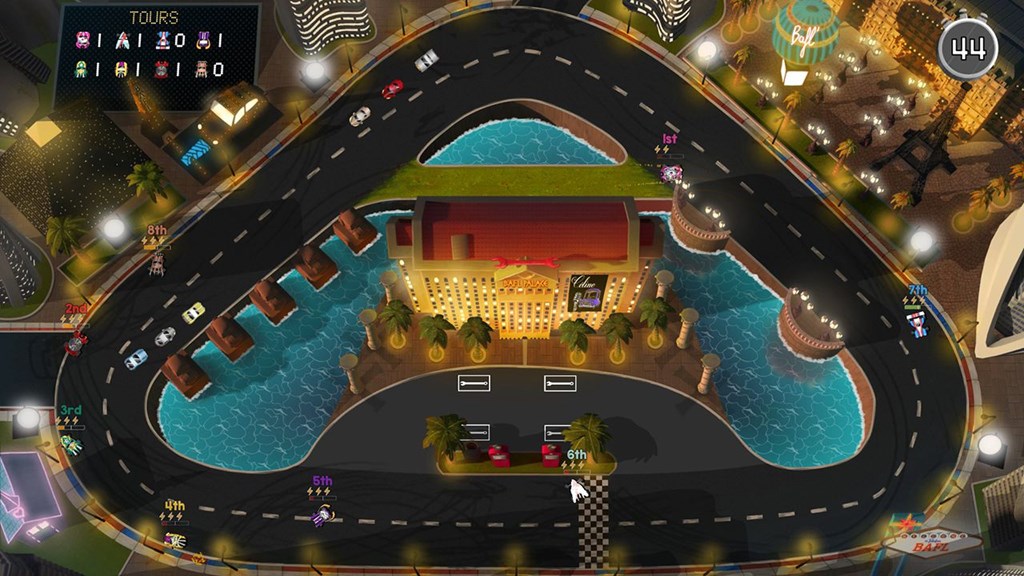 Races take about three minutes to complete, but feel like they last just a little too long each time. You will lap the same, very short track on average 8-9 times and when playing through a cup, it’ll more often than not present the same track. These courses are also considerably thin and small, meaning the eight karts flailing around at ridiculous speeds around the racing areas will often become obstacles themselves. At first, I thought it should be fun, but it took not even two races before my thoughts grew into disappointment. The tracks and concept are built to have you bashing into other racers and into walls, so I don’t understand why the gameplay punishes you for doing so.

In the concept of BAFL: Breaks Are For Losers, there really can be some fun found, but its execution and final product is where the package just doesn’t come together. There’s a severe lack of content interesting enough to entice nearly anyone to enjoy, and when a game itself isn’t fun enough to play, you have to wonder why you should bother. Unless you’re a gigantic fan of top down racers and just need one of any quality to satisfy your itch, I have a hard time recommending BAFL: Breaks Are For Losers.

BAFL: Breaks Are For Losers review copy provided by Playdius for the purposes of this review.