Posted on September 11, 2021 by Elias in Reviews, Switch eShop

Button City is a colorful low poly narrative adventure game about friendship and community. Enter a pastel diorama world inspired by 90’s nostalgia and filled with cute characters to befriend. As Fenn, the new fox in town, you’ll explore your new community and make new friends in the process, but what is the core gameplay of such an easy-going and colorful experience?

Fennel the fox is the new kid, and has spent most of the summer holed up in his room playing video games, a summer we probably have all experienced at least once in this day and age. His mom wants him to get out more, so she sends him on his first of many fetch quests: go obtain a sandwich for her before she has to go to work. Now of course, we can’t help but get a bit distracted by all the new sights (and if you are me, you’re going to discover the litter on the ground, delight that you can pick it up, and then become hellbent on collecting it all) and soon you lose track of your endeavor by entering Button City, an arcade in town where a lot of local kids hang out and play games together. Early on, Fennel is introduced to Gobabots, a multiplayer robot fighting MOBA that reminded me heavily of Gundam Build Fighters, requiring a figure to use in battle that can be gotten from a gacha machine in the arcade. While this first seems to be a big part of the plot, it’s merely an introduction. Soon, Fennel finds out that the arcade he’s so excited to discover is at risk of being sold. Fenn and his new friends feel that they have to save the arcade, and take it upon themselves to go up against the corporation vying for the sale — but will they be successful?

Button City has a variety of arcade games that you actually get to play. Aside from Gobabots, there is a racing game and a rhythm game. All three of these games can be played to rack up high scores and win things like costumes and prizes. For me, the racing game was the most fun, and even though I’m unusually terrible at MOBA titles, Gobabots was an absolute joy to pick up and learn. While the rhythm game itself is not bad, the other two were just more fun for me. Perhaps I was spoiled by too much dance-pad Dance Dance Revolution as a kid, but since then controllers just don’t feel the same for that type of experience, and I recognize that it likely detracted from my personal experience. While none of these were too challenging, what they did accomplish was being a great and relaxing way to wind down after a stressful day at my day job, a task that games like Animal Crossing and Story of Seasons usually fulfills. 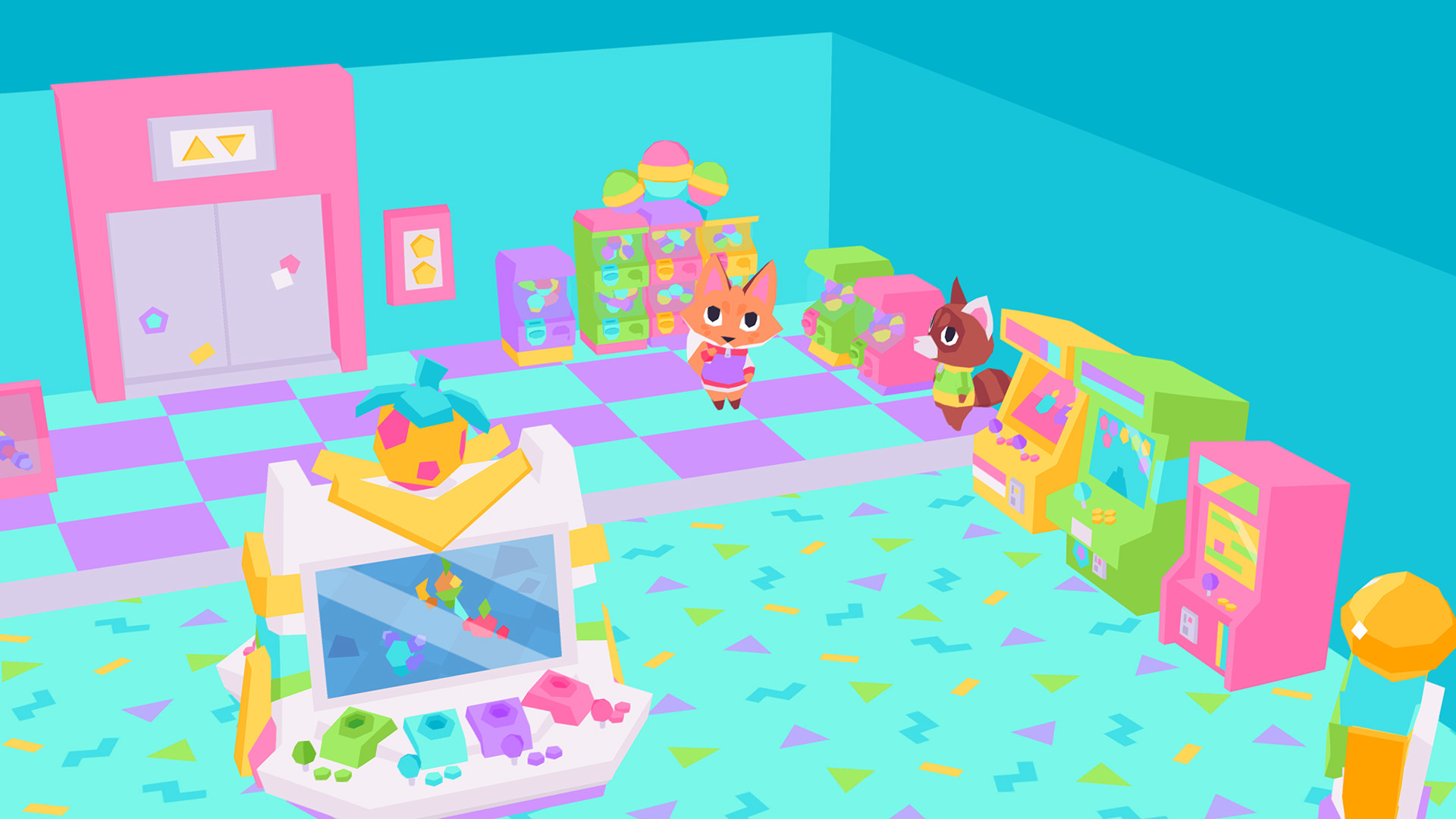 Button City controls really easily, and I was able to figure things out easily early on. My only gripe at all about this game is that Fennel moves incredibly slowly. While in no way is this a deal breaker, I definitely found myself annoyed at this early on, but did end up getting used to it about an hour in. The maps themselves are rather small, and its not like you’re supposed to run indoors, right? Safety reasons. You’ll put your eye out, kid! Aside from controls, the menus are minimalist and easy to understand. You can quickly save your game and take a break should you feel the need, and loading back in is also very easy. This makes the game fairly accessible to younger players. Without a bunch of complicated tutorials and menus, its easy to just focus on the story and enjoy your time with the minigames.

The low polygon graphics are simple and colorful, and the characters are absolutely adorable. Each of the other children is fully fleshed out and very well written. The game itself really comes alive due to the care taken in the writing. While the run time of the game is about six hours overall if you don’t spend too much time on the minigames, I felt like the story was completed well and that everything came together to make a wonderful package that was wrapped up with care. I wish there were more adventures with Fennel and his new friends, and I’m hopeful that this isn’t the last we will see of Button City.

Button City is a short adventure, but one with a lot of nostalgic feel. If you grew up going to the arcade with your friends, this will remind you of those simpler days. While the quest the kids strive to complete is a daunting task, their quirky personalities shine through, and together they prove that a group of friends can accomplish a lot if they work together.

Button City copy provided by the publisher for the purposes of this review.