[Review] Doraemon Story of Seasons: Friends of the Great Kingdom 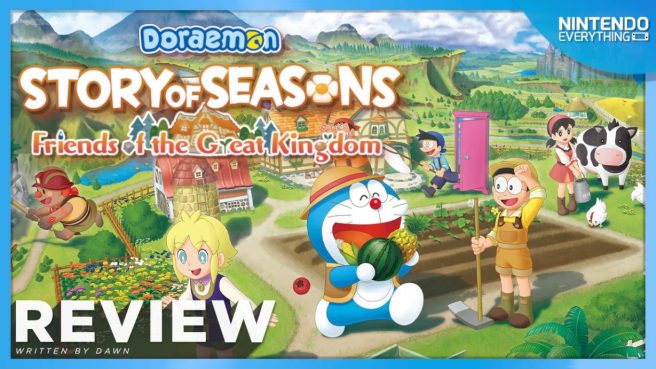 Over the last few years, life and farm sims have been steadily growing in popularity and, with critically acclaimed titles such as Stardew Valley and Animal Crossing: New Horizons also on Switch, standing out amongst the crowd is a difficult thing to do. If there is any franchise equipped to do this in modern times, however, it would be Story of Seasons – one of the oldest and largest farm sim series that has been around since the SNES, and has seen several installments as well as spin-offs such as Rune Factory over its lifetime. Doraemon Story of Seasons: Friends of the Great Kingdom is another such offshoot, taking the traditional Story of Seasons gameplay and blending it with the world of Doraemon, which is an extremely iconic franchise in Japan. But is this a match made in heaven?

Friends of the Great Kingdom is a standalone sequel to the original Doraemon Story of Seasons, and once again puts you in the shoes of Noby Nobita who, after having an argument with his parents about not wanting to do any summer homework, decides to run away to another planet with Doraemon and his other friends. They meet Lumis, a young prince who wants to revitalize an old farm, and Noby is quick to throw himself into the task while his friends find jobs in town. Unfortunately for them, their rocket and Doraemon’s gadgets attract the attention of the queen of the land, who promptly confiscates them out of fear that they may prove a threat to her kingdom. Noby now needs to ingratiate himself with the community to prove his good intentions and get his rocket back so he can go home, which he can do by helping out around town, and by revitalizing the farm. Although the game’s story is by no means the most original or exciting tale, Friends of the Great Kingdom goes all-in on its telling, and gives you plenty of side plots and character development for every character in the community, and it fits in nicely with the gameplay loop and provides context and meaning to each gadget you unlock as the story progresses and you ingratiate yourself with the community. 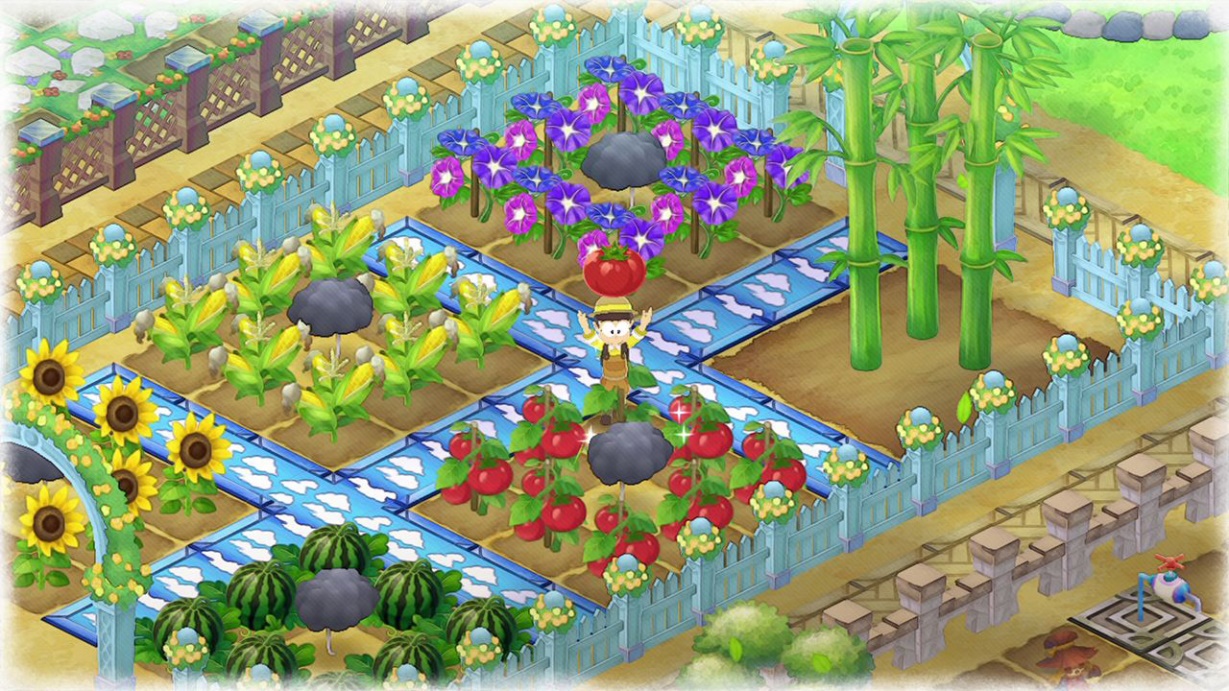 Anyone who has played a life sim in the past will find familiar gameplay in Friends of the Great Kingdom with activities such as planting and harvesting crops on your farm, tending to livestock, mining for materials to upgrade tools, fishing, and bug catching taking up the majority of your time. Activities will cost stamina points represented by hearts in the top left hand corner of the screen, and time will pass at an accelerated rate as you play, which will also determine what facilities are open. The game also has a seasonal cycle, which affects which crops you can cultivate, what bugs or fish will appear, and can also trigger special events. There is nothing in the game that you will not find in other, similar title, and though this by no means a point against it, if you are looking for a life sim that sets itself apart by having unique gameplay mechanics you won’t find elsewhere, this is not the game for you. Friends of the Great Kingdom is a Story of Seasons title through and through in the gameplay department, and it does everything to the standard you would expect of the series.

For those unfamiliar with the genre, while having both a limited stamina pool and an accelerated day-to-night cycle may all sound as though the game is attempting to rush you (and I did sometimes feel as though there wasn’t enough time in a day or stamina to get things done), there is no penalty for failing to accomplish things within a set time frame, allowing you to set your own pace and engage with whatever you choose to during each in-game day. The title allows you to relax and take your time. It will gently point you in the right direction to advance the story (more on that below), but it does not at any point force you to do so, affording you a freedom not commonly found in games outside of the genre. The only real penalty comes from overworking – either using all your stamina or too late into the day – which causes you to collapse and wake up later the following day, costing you some time in that day. As the game’s shops and facilities open at set times, you may need to rush to visit one if you want to, but there is nothing to stop you from sleeping until the next day, so this is a minor inconvenience at most. Some tasks taken from the bulletin board will need to be completed by a set date, but there is no penalty for failing to do those either. 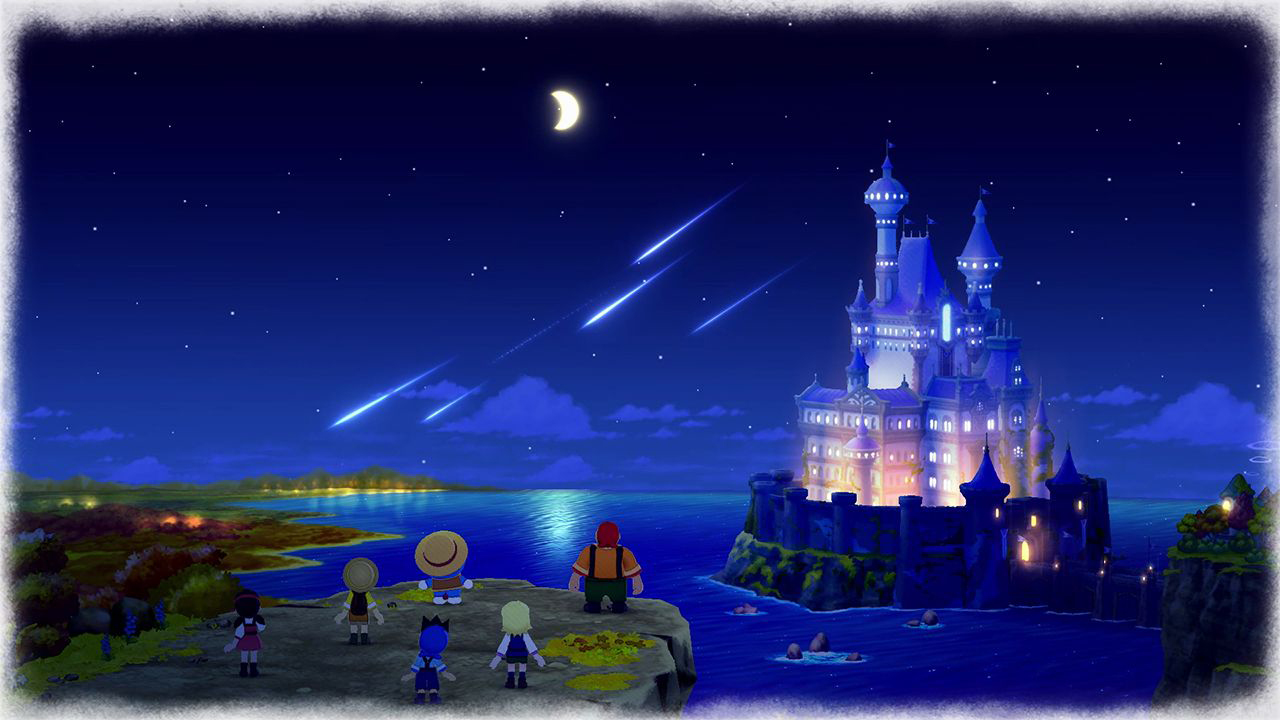 Where Doraemon Story of Seasons: Friends of the Great Kingdom differs from many other life sims is in its narrative style, being more focused on telling a story than on leaving you to create one yourself. As this is based on the Doraemon franchise character creation, customization, and romance are all completely absent, instead putting you in the role of Noby, who has his own defined personality. But what the game lacks here it more than makes up for in depth: even if you are unfamiliar with the Doraemon franchise (as I was before going into this) the game will give you plenty of opportunities to get to know the characters, most of whom are unique to the game, meaning a familiarity with the franchise will only allow you to be familiar with Noby and his friends. In the early hours especially there is a lot of character dialogue, making this feel more akin to an Atelier series title than a more traditional Story of Seasons experience at times, as characters go about their daily lives independent of Noby and will interact with each other as well as with him without your prompting.

Although this may not be to everyone’s taste (particularly if you are looking for a more traditional life sim experience) and can slow down the gameplay at times when you are forced into cutscenes constantly – and some you will no doubt find less interesting than others – I found this to be a refreshing change of pace, which helped more than hindered immersion in the game’s world in the opening hours. Resources are sometimes frustratingly limited, the lack of inventory space means you will need to constantly trek back to the farm to free up space, upgrades cost a significant amount of gold and resources (although it is worth noting this is not as grind-intensive as other games in the genre, including the previous Doraemon Story of Seasons title) and you will need to advance the game’s story before you can take advantage of Doraemon’s gadgets to speed up the process.

Another way that Friends of the Great Kingdom bucks the traditional hands-off approach is by having an extremely comprehensive to-do list feature, accessible through the game’s menu at any time, which is conveniently broken down into categories: important story events, friendship events, and requests which you can take from the town bulletin board. Many life sims have very vague requirements for narrative or character relationship progression, and you can easily lose hours before you finally figure out what to do to advance, so having it spelled out in a non-intrusive menu this way was something I appreciated enormously while playing the game, and it made the game feel much more evenly paced. At no point during my playthrough did I feel stuck for something to do, or feel as though I was wasting my time waiting for the next goal or day-specific event. At the same time, there is no pressure to work specifically towards objectives on the to-do list. 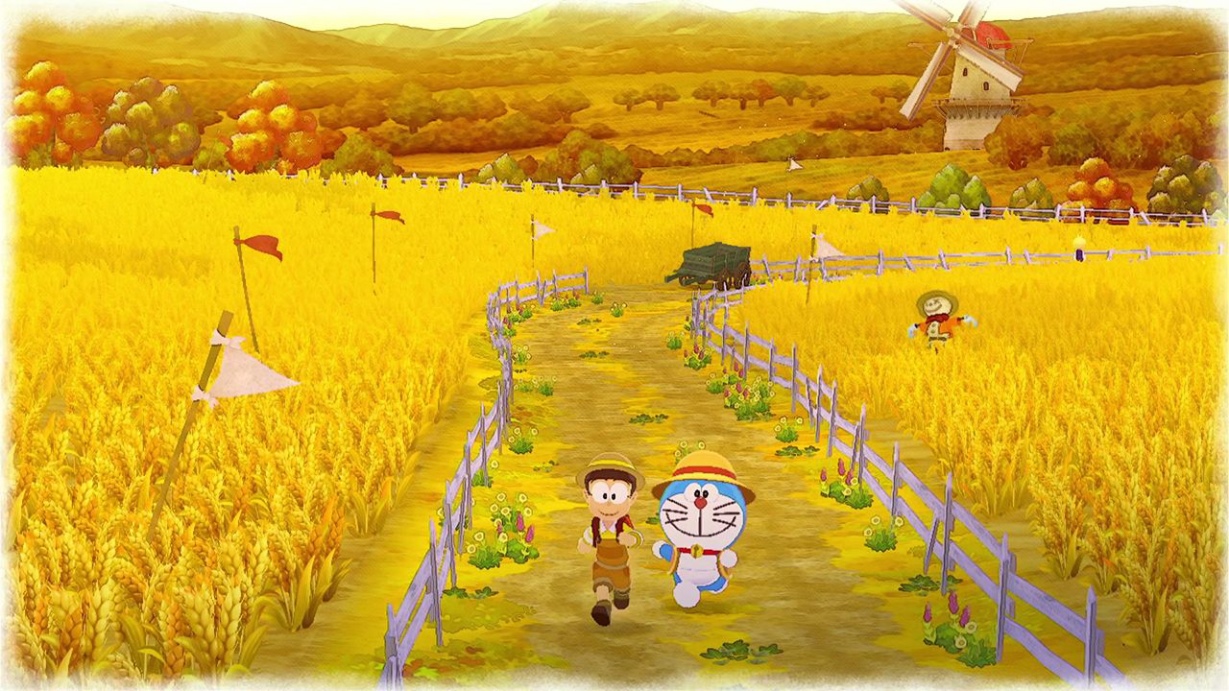 The game is clearly designed to be as accessible as possible to newcomers. As well as the aforementioned to-do list, crop bags are color-coded by season, the map displays facility opening hours, NPC locations, and markers for events, and as you progress you will unlock various gadgets through Doraemon that streamline the experience, such as being able to warp anywhere on the map, have your crops watered for you, faster movement speed across the map, and the ability to move planted crops to make it easier to organize your farm. These are all entirely optional, so those who would prefer a more traditional farming experience can forgo using them entirely if they wish. Noby can also nap for a period of time to restore stamina, which is helpful for more time-consuming tasks early in the game if you don’t want to deal with having him collapse. Later you can also recruit characters to help you with tasks, which is a nice substitute if you do not have a friend to take advantage of the two player co-op mode with. In the early hours the slower gameplay pacing, limited inventory space, and sometimes excessive amounts of dialogue and cutscenes may test your patience, but the further you progress in the game, the easier it becomes to manage your time and your resources.

Doraemon Story of Seasons: Friends of the Great Kingdom is beautifully presented, with vibrant watercolor style visuals complemented by anime-style character portraits and a few cutscenes that make the game feel like a very high quality anime episode in places. The initial loading time is just long enough to be noticeable the game runs smoothly on Switch, with in-game loading times between areas being very brief. The game has similarly excellent sound quality, with a relaxing, non-intrusive soundtrack and a reasonable amount of Japanese voice acting that breathe life into the game’s many interactions, although unfortunately not all of these are fully voiced.

Although there are arguably better gameplay experiences in the genre out there, Doraemon Story of Seasons: Friends of the Great Kingdom stands out amongst its peers by being a far more narrative-focused experience, as well as a significantly more accessible one with features likes its to-do list and detailed menus, giving you easy access to a lot of information that other comparable games expect you to figure out and remember by yourself. This will not be to everyone’s taste and will no doubt deter those looking for an experience more reminiscent of a traditional Story of Seasons title, but this is still a game I would recommend to fans of the genre. For those who have been put off in the past by the slower pace and more hands-off approach to gameplay and progression taken by life sims, this is the perfect title to try if you’re interested in picking one up, as it gently points you in the direction of the next objective without rushing you towards it.

Doraemon Story of Seasons: Friends of the Great Kingdom copy provided by the publisher for the purposes of this review.