Suda51 delivers a well-produced mecha anime that’s as hyperactive as it is hyper-nationalistic. But how’s the actual game?


Level 5 really haven’t been having a whole lot of luck when it comes to the 3DS. Professor Layton and Inazuma Eleven might still bring in the cash, but the company’s attempts at starting new IPs like Time Travelers and Girls RPG: Cinderella Life sold poorly. But perhaps their biggest bomb of all was Guild 01, a compilation of quirky games that sold fewer than 15,000 copies upon its first week of release despite having some well-known game designers collaborating on the project. Oddly enough, Level 5 are now giving Guild 01 a second chance by rereleasing most of the games in the compilation through the 3DS eShop. The first of these titles to be available outside of Japan is Liberation Maiden, a 3D shooter heavily inspired by Japanese cartoons – specifically the kind where plot is second to cool robots flying around and blowing stuff up. 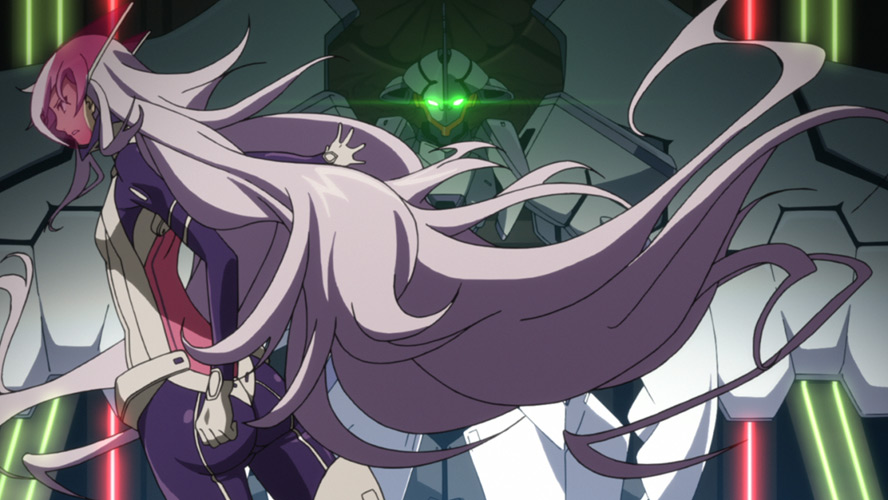 Designed by a small team led by Goichi Suda (aka Suda 51), Liberation Maiden tells the story of Shoko Ozora, the teenage daughter of the President of Japan. After her father is assassinated, Shoko has to take over his position and attend to important presidential duties like flying around in a robotic suit and fighting off an invading country that’s sucking out Japan’s energy through massive “Conduit Spikes”. For a game with such a ridiculous premise, Liberation Maiden takes itself awfully seriously. By Suda 51 standards, the plot is surprisingly restrained and aside from the obvious pro-environment message there isn’t a whole lot of substance to it.

Shoko is guided through missions by her secretary, Kira, but neither character is particularly interesting. Aside from Shoko’s repetitive sound bites, the dialogue only serves to dryly explain objectives and it’s far from the constant, charming banter of Kid Icarus Uprising or Star Fox 64. The voice actors do a decent job with a mediocre script, but it’s particularly jarring to go from a game like Kid Icarus to Liberation Maiden because the action pauses whenever anyone speaks. For a game that otherwise moves at such a quick pace, it’s strange that the developers made the exchanges between the pair interrupt the flow of battle. 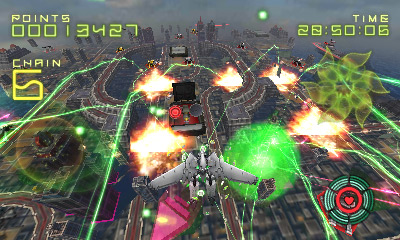 While Liberation Maiden’s plot never gets too crazy, the actual gameplay can get quite hectic. The game feels like it was designed as an arcade-style bullet hell shooter that was adapted to work on a 3D plane, with the circle-pad and L button allowing the Liberator to fly and strafe in any direction. Locking onto targets to fire missiles and aiming the Liberator’s laser are all handled by sliding around on the touch screen, which works well although there’s no option for left-handed players. Interestingly, the Liberator’s shields also act as its weapons, meaning that going all out with a barrage of missiles and lasers will leave it wide open to attack. This creates a nice risk vs. reward mechanic that helps battles to move at a quick pace. If everything starts to go wrong, Shoko can also unsheathe the Liberator’s blade to unleash a massive explosion (but only if it’s fully charged).

Each level’s basic structure of “defeat a bunch of enemies, fight a lesser Conduit Spike, repeat three times until a massive Spike appears” doesn’t really change much, but the game rewards exploration with a few extra side missions. You’ll want to check out the whole area not just for these bonus challenges, but also to seek out every building in sight. Shooting man-made structures causes an explosion of nature similar to Okami, which increases Shoko’s “restoration” rating. Maxing out the rating for each level unlocks some of the game’s “accomplishments” — unlockable art and information that provides some incentive to go back and play through the game on higher difficulty levels. Liberation Maiden only takes about an hour to finish, so any sort of replay value is welcome. There’s also a “stage attack” mode, but the scoring mechanic (never stop destroying things) isn’t particular interesting and the game doesn’t even have online leaderboards so there isn’t much reason to replay levels for a high score. 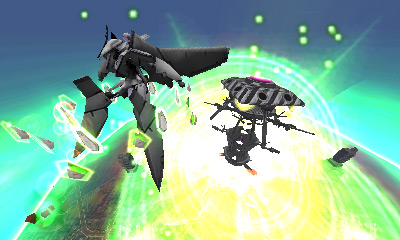 Shoko’s mission takes her all over Japan, but none of the environments are particularly noteworthy, nor are any of the enemy units. Even the colossal, multi-part Conduit Spikes don’t have interesting designs and it results in most of the boss fights feeling too similar. That said, I really liked the design of Shoko’s giant robotic suit — it looks like a cross between a samurai and one of the Variable Fighters from Macross. The soundtrack is also a high point. Veteran composer Akira Yamaoka serves as sound producer, and while his compositions are remarkably different to his work on the Silent Hill series, they do an excellent job of complementing the madness onscreen. I particularly enjoyed the way the music follows the progression of each stage, always culminating in some ridiculously over the top battle music.
The bottom line…?

I never thought I’d say that a game where an anime schoolgirl pilots a robot suit that turns cities into forests isn’t weird enough, but when compared to Suda 51’s other work Liberation Maiden just feels a bit flat. Maybe it’s the uninspired dialogue and lack of character development or maybe it’s the rather dull graphical style and designs. Whatever it is, if you go into Liberation Maiden expecting Suda’s typical off-the-wall social commentary, dark sense of humour and bizarre plot twists, you’ll definitely be disappointed. However, if you’re after a solid arcade-style shooter and aren’t totally turned off by all things anime, Liberation Maiden delivers some brainless fun. It’s definitely a short game, but little touches like the explosions of nature and anime cutscenes make the overall experience quite satisfying. Liberation Maiden has potential that could be expanded on, and not just because of its cliffhanger ending. Let’s hope Shoko ends up being re-elected for another term as president.