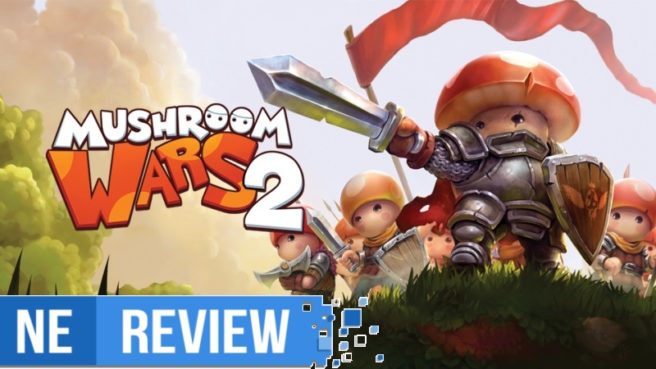 As someone who is mostly a console gamer, I’ve never dipped my toes into the real-time strategy genre too much. The closest thing I have to a true RTS experience has been my experience with the Pikmin titles which, to no one’s surprise, isn’t exactly the deepest strategy game on the market. Mushroom Wars 2, being originally developed for the mobile and PC markets, finally hops onto the console world through the Switch. Does it do enough to sprout a following or is the game just simply not that fun, guy?

Much like it’s predecessor, Mushroom Wars 2 has you controlling a tiny army of mushroom warriors as you plan a conquest on mushroom towers that host enemy mushroom warriors that you must defeat and take over their towers for the sake of, mushrooms? This is all explained in silent images that flash by as you begin the main campaign, but it never really contextualizes much more than “these mushrooms don’t like each other”.

When you start a battle, you and your opponent begin on opposite sides of the map and must send your ever growing army to the vacant towers scattered across the area in a race to who can grow the strongest and most capable army first. As a commander of the army, you have to choose the right moments when to wait and grow, when to start breaking down enemy towers, or when to spread your forces thin to get all the vacant towers first.

Something that I love about Mushroom Wars 2 is that from its most hectic battles to even the most simple ones, all of the elements and cards at play always make an enjoyable time. I never began to think “Okay, this is getting too much” at any point, even when further into the campaign where you have multiple villages, towers, and forages to look after. There’s something just so blissful about watching a risky move pay off and watching your dozens of Mushroom Warriors waltz on over to the last enemy tower, wiping the enemy clean. That actually sounded pretty graphic, but it’s cute – I swear. 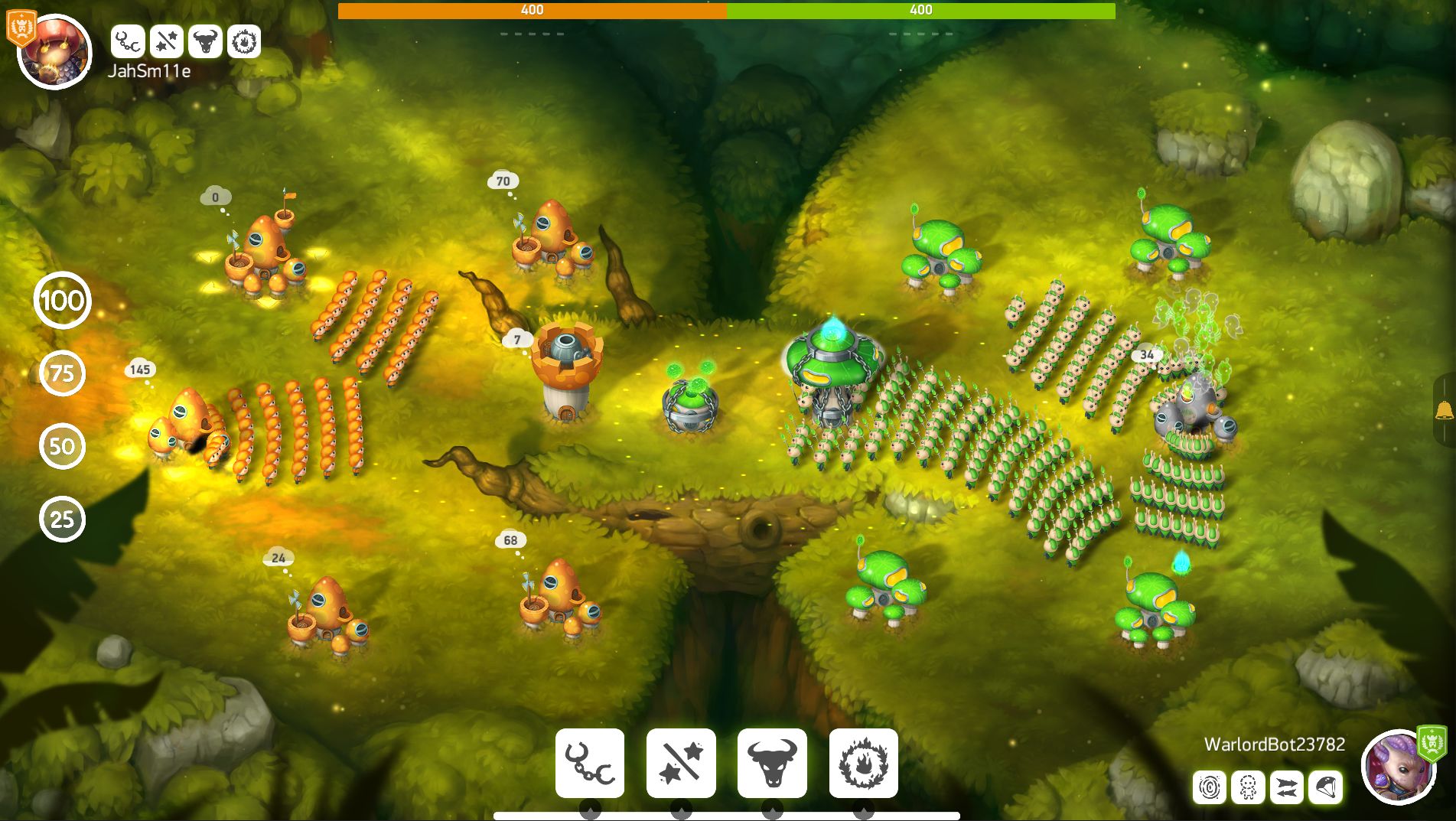 During my time with Mushroom Wars 2, I did find myself growing frustrated with one aspect. The game actually controls really, really awkwardly. During intense points of battles, the absolute last thing I want to worry about is my cursor landing on exactly where I placed it. Both the menus and actual gameplay both suffer from this problem, and since this is the first time Mushroom Wars 2 has found itself on a system that uses analog controllers, it’s clear that playstyles like what the Switch provides probably weren’t considered heavily during development. I caught myself fighting to move my cursor just one place over because something as simple as trying to move one tower to the right would cause me to jump three towers over above me. Even using the directional button pad on the left Joy-Con would sometimes register a very delicate tap as two-three places down instead of just the one I inputted. It’s frustratingly sensitive and that constantly would cost me a tower or two, setting me back in battles for something I couldn’t, quite literally, control.

On a more upbeat note, however, Mushroom Wars 2 actually looks right at home on consoles. Despite being a mobile title from the beginning, the shimmering light effects that illuminate the green garden landscapes really do look wonderful docked or undocked, and all the visual indicators for gameplay that are spread across the battlefield are the perfect size to stick out, but not make the screen seem crowded.

When all said and done, what’s here and what works is actually a fun time. I had plenty of exciting close calls and enjoyed being able to quickly pick up, play a battle, then put it back down in mere minutes. Aside from the control format, this game really does feel at home on the Switch. If you are looking for something that is a quick play-and-go style title that will last hours of good, evolving fun then Mushroom Wars 2 is just waiting for you to come and seize the kingdom. Fans of more deeper real-time strategy titles should just keep in mind that they may find what’s here just a tad too shallow.

Mushroom Wars 2 is, plain and simple, a well designed real-time strategy game with mechanics that just work, visuals that bloom, but its all anchored down by the fact that its port to the Nintendo Switch hasn’t been as buttery smooth as one would hope. What’s there is actually a fun title filled with hours of missions through a very extensive (but story lacking) campaign mode, a full online multiplayer mode that allows private and public matches, and a plethora of memorable battlefield memories. Perhaps with a future update the cursor issue can be resolved so we may relish in the wonderful game that hides beneath it, but until that day, the game we have still has enough to be thoroughly enjoyed.

Mushroom Wars 2 review copy provided by Zillon Wales for the purposes of this review.