Posted on May 29, 2022 by Dennis Gagliardotto(@LyonHart_) in Reviews, Switch eShop 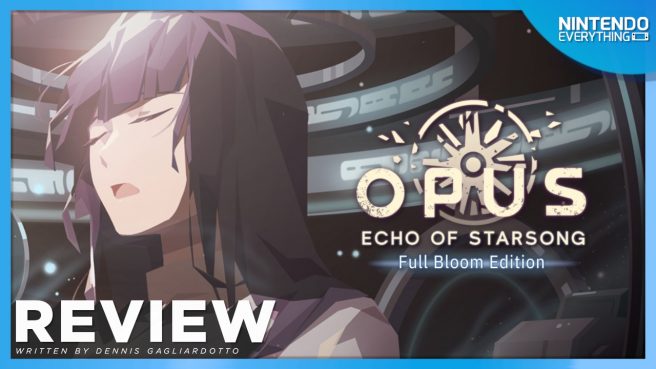 OPUS: The Day We Found Earth introduced me to the wonderfully talented SIGONO and the studio’s clear ambition to tell stories in a way that was equal parts refreshing, wholesome, and evocative. Roughly a year later and not long after its PC release, the developer brought us a follow-up of sorts (though not a direct sequel) with OPUS: Rocket of Whispers, which was more of an atmospheric point-and-click experience where you’d look through a telescope and locate different planets utilizing and coordinates and data you had at your disposal. The ambition for SIGONO was clearly to push their talents forward while still being able to tell this extremely palpable and moving story, and they excelled once again. Now comes along OPUS: Echoes of Starsong, which is once again vastly different from the other two entries in the series they’ve produced, but the gap in time and growth within the studio is put on display in such a way that the game is not only the best of an increasingly joyful series so far, but could easily be considered one of the most stunning, emotionally-driven, and unique visual novels of all time.

OPUS: Echoes of Starsong does a lot of things different from its predecessors, though once again it’s worth mentioning that while they share the name, they’re not necessarily direct sequels to each other. It’s because of this new vision with each game that I’m always excited to see what SIGONO is going to do next with the franchise, and while they’ve stripped down a lot of the gameplay elements compared to The Day We Found Earth and Rocket of Whispers, they were able to put their core strength and everything they had into providing one of the most immersive and captivating stories I’ve experience in a long time, if not ever, and certainly for the OPUS series so far.

Given the game’s year head start on PC, Echo of Starsong comes to Switch by the way of its Full Bloom Edition, and though it may sound like it comes with huge upgrades, extensive new routes, or even an accompanying soundtrack you’d typically find with an enhanced version of a previously released visual novel, all it really does here is provide full voice acting compared to its initial release. However, what was once already a narrative achievement is made even more exceptional with its new voice acting in tow which bring these characters to life even further, including the main characters you’ll be experiencing the bulk of this journey with: Eda and Jun.

OPUS: Echo of Starsong focuses on yet another galactic setting, but this time dealing with asteroids, comets, and the like that emit melodic tones known as Starsongs. These songs come in various decibels, but with the vastness of space it is increasingly difficult to seek them out without the help of witches that have talents in uncovering locations and songs, and it’s with these songs that they lend themselves to further uncovering the secrets and history of space. While it all sounds like a straightforward and “easy” task and plot, everyone has a troubling story that’s led them to this point, and Echo of Starsong’s diverse and humble cast of characters – especially the two you follow between Jun and Eda – all contribute in such a wonderful way that’s so methodically thought out and woven into each other in a beautifully intricate way that by game’s end the journey you’re on with the people you meet will more than likely leave you with tears in your eyes.

There’s a beautiful song and dance that happens between the characters of OPUS: Echo of Starsong and the way the narrative structure of the game conveys and reveals itself throughout. It is an absolutely stunning and jaw-dropping graphical delight as the visual novel bestows its cinematic adventure unlike any other, balancing a perfect pace alongside light gameplay elements in the form of extremely simplistic puzzles and interactions for a bit of a palette cleanser in-between its heavy narrative. Even for something that would be typically linear like a visual novel can be, being able to walk through the caves, decrypting messages, revisiting memories, upgrading your ship, and choosing where to travel to next gives another huge layer of depth to OPUS: Echo of Starsong that gives way to creating a perfectly packaged experience, even if you’re doing the most minor of tasks and inputs. It can give a subtle point-and-click feel to it at times, but make no mistake the visual novel nature of the game is never strayed away from, and these light gameplay elements are just enough to make the whole experience feel much more comfortable and personal without the need to over complicate things we see so often of in games with a space setting – you won’t necessarily have to worry about oxygen levels or anything that would lead to uncertain death, or upgrade your ship in a way that would only be suitable with an actual degree in engineering.

Those used to visual novels will have a lot to appreciate and love as OPUS: Echo of Starsong remains consistently engaging thanks to so many wonderful illustration and animations that bring scenes further to life more than other titles in the genre, which typically feature a standard portrait on each side of the screen with an accompanying static background. But even those that may dismiss the genre or not play many games within it will find an accessible experience that will introduce them to a wonderful space opera of sorts that’s easy to familiarize yourself with and get lost in. Dialogue spoken from each character is also written in such a way that gives huge depth and personality to even the smallest of roles, and the voice acting never gets put on hold or affected by budget no matter how insignificant the word is. Each character’s design process is also immediately recognizable, and even with a signature art style it’s rather incredible to me that SIGONO can consistently make each stand out in their own way and never once feel like a rehash or done through cheap labor at any point in OPUS: Echo of Starsong’s story.

In addition to the myriad elements that makes OPUS: Echo of Starsong stand out among the rest of its peers in the genre, however, is that SIGONO continues to take every chance possible at putting their artistic prowess on full display through wonderful environments and representations of the cosmos. Your 10-12 hour trek from start to finish will bring you across a multitude of locations in and around its hub of Thousand Peaks, all lathered with an atmospheric canvas that makes the music and ambiance become just as integral to OPUS: Echo of Starsong as its narrative and every other layer of the game that makes up the riveting package SIGONO has done with OPUS once again. In moments filled with anger, sadness, happiness, humor, and many other emotions that run wild throughout and give backstory and life to each and every character and story beat that’s a part of Echo of Starsong, this new game almost feels like a magnum opus of the team’s learnings over the years to create such a special experience, and with its new Full Bloom Edition on Switch, it’s a perfect refresh for a game and series that’s told some of the best heartfelt sci-fi stories since the system launched five years ago.

SIGONO has a connection to the soul I’ve never really seen before anywhere else. Plenty of games have been able to pull heart strings and provide these emotive and evocative experiences that stick with you, but with the OPUS titles, they have consistently told a story that has been equal parts beautiful, thoughtful, and unforgettable all while remaining vibrant and engaging. Although they’ve all been fairly dialogue and story-heavy, OPUS: Echoes of Starsong is essentially a pure visual novel experience that is unlike any other, and is without a doubt their most beautiful and polished game to date that will also go down as one of the most incredible visual novels of all time. Experiencing this on both a 4K TV and Switch OLED further exudes the sheer artistry of the studio, and its art direction and storytelling will remain as a staple of excellence for years to come. When it comes to visual novels, you rely heavily on your story to be the driving force of captivation and engagement for your players, and OPUS: Echo of Starsong does so with brilliance and panache throughout its 10+ hour space adventure.

OPUS: Echo of Starsong – Full Bloom Edition copy provided by the publisher for the purposes of this review.