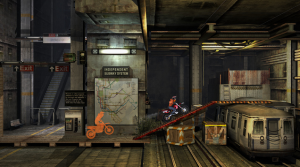 The concept is simple: you have to get your motocross rider to the end of the level while launching off ramps, speeding down them, doing flips, and avoiding obstacles. The challenge lies in ensuring the balance of your player on his bike: if you’re flying through the air you had better make sure that your bike is even with the ground before you land, because failing to do so will cause you to wipe out. Or if you’re accelerating forward to get a nice launch off a ramp, you don’t want to lose control of your bike and end up flat on your back.

Urban Trial builds upon this basic idea by providing rich levels full of different and interesting platforms, ramps, obstacles, and loops. The game is not just about going fast and getting air — sometimes you have to play it smart. At one point I was going too fast off of a long board and ended up slamming my character right into a wall and falling down a hole. After some trial and error (or rather, several wipe outs later), it turned out that I had to brake so that a falling dumpster would hit the end of my board and launch me into the next section of the level. In another area that looked like there was no way for me to progress, the solution was getting plenty of air to backflip off a ramp so that I would break a grate on the ground when I landed, allowing me to progress through the sewers. I enjoy these sections of the game because they make the levels a bit more interesting, and also snap you back into focus by making you take a break from just slamming the acceleration to get through as fast as possible. 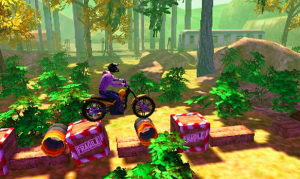 Another addition that expands the gameplay are the “stunt areas,” sections found throughout each level in which the player will have to perform a certain kind of stunt in order to gain points toward their overall score for the level. In the “Highest Jump” stunt area, for example, your goal is to– as the name would entail– get as high as you can off of a particular ramp. There are lines on the screen indicating your personal best, as well as the world record, and a line will follow you as you go higher and higher, letting you know where you scored in relation. In each level, your score is based on how well you did on stunts, as well as the time you completed it in, and how many times you wiped out. You also receive a certain amount of stars (1 to 5) depending on how high your score is. The stunt areas are great because they encourage you to work for your points; if your jump wasn’t nearly as high as it should have been, you’ll want to try different things to achieve maximum air that maybe you didn’t try the first time around. It also feels great to perform a stunt and either beat your personal best, or even set the world record!

Visually, Urban Trial is excellent. The gameplay is 2-dimensional, but the levels are very much 3-dimensional and rich. Your focus is on the platforming objects that you’re riding on, but there’s so much more to see, like the detailed cities, parks, and other environments that reside outside of the 2D track, and the 3DS’ 3D screen enhances this incredibly by providing a great sense of depth. Since the gameplay is rather simple, the fact that the visuals are so fleshed out definitely adds to the experience. 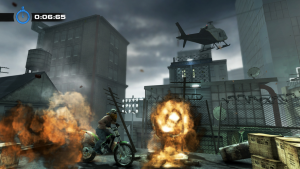 Urban Trial has plenty to offer in terms of gameplay, unlockables, and replayability as well. With smaller, digital-download titles like this, those are all must-haves because they extend the amount of play the user gets out of the game. There are plenty of worlds that contain three to five levels each, and completing a certain amount of levels in a world will allow you to progress to the next one. If you get a certain score in the levels that are available to you, you will unlock even more. The levels are also non-linear, meaning there are multiple paths you can take to complete a level, as well as multiple ways you can progress through certain challenges. This makes the levels more replayable, and also makes the game’s Time Attack mode more challenging, because you’ll need to find the fastest path through the level. You acquire money by completing levels, which can be used to customize your character and your bike, the latter of which will actually improve your bike’s stats. In a game like this, you need all the help you can get!

The game also has a map editor, which is one of the most amazing things about this game for its sheer extensiveness. You can choose various settings based on the worlds in the main game, and each setting provides tons and tons of walls, objects, platforms, ramps, and more to choose from. You can chose level objects and scale them and rotate them before placing them on the level map. The level editor not only works very smoothly, but you can also be sure your level works to your liking by test playing it at any time. That way, you can test your level as you go and reposition/replace objects and ramps accordingly. Players can build and play up to 30 of their own creations, extending the challenge exponentially.

The bottom line…?
Urban Trial Freestyle is a game for anyone who enjoys challenge-based games, or has fond memories of those old aforementioned Flash games. It’s a great game to pick-up-and-play for a bit, although it can be very hard to put down! I found myself saying (and in some cases, shouting) many “Aww”s, “Argh”s, and “Oh my god!!”s while playing, both out of frustration and out of pride/awe for overcoming an obstacle in a certain way. A great challenge game is one that can evoke those kinds of sensations in you.

… you enjoy fast-paced platformers with a challenging edge, and addicting games that are short enough to pick-up-and-play, but offer enough content to keep you coming back for a long time.

… you’re not up for a challenge, get frustrated too easily, or generally don’t enjoy replaying levels you’ve already completed to improve your scores.