Posted on June 30, 2018 by Jakob Vujovic(@jakovujo) in Reviews, Switch 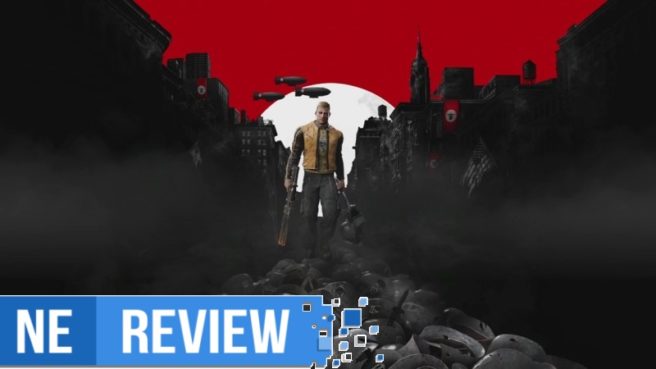 When MachineGames rebooted Wolfenstein with The New Order in 2014, most people didn’t expect that its story would elevate it from a mediocre shooter bogged down with odd gameplay design decisions to a minor classic. The reboot was only really Wolfenstein by name, taking place in a dieselpunk alternate history World War II where Germany developed and dropped the first atom bomb on America, leading to the surrender of the Allied forces and the Third Reich’s world domination. It really only carries on the name of its protagonist, “B.J.” (or William J. Blazkowicz), along with his propensity towards killing Nazis.

Wolfenstein II is positioned as the second story in a trilogy, but it provides enough of a recap to get players up to speed, picking up straight off the cliffhanger ending of the first game. The New Order was largely overlooked, so this is helpful for players on any platform. That first game isn’t available on the Switch, so this is especially important. If you’re reading this particular review of an eight month late port, you’re probably wondering whether or not this game made my Switch melt. It’s actually, mostly, surprisingly playable.

The studio behind this port, Panic Button, also ported Doom to Switch, Bethesda’s other notable id Tech 6 game. If you played Doom on the Switch, then you should have a pretty good idea of how Wolfenstein II holds up here. It runs at 30 frames per second with dips, albeit usually pretty minors ones. Playing in handheld mode, the game’s resolution is consistently well below that of the Switch’s screen. A very aggressive anti-aliasing solution means that in all but the most hectic Nazi shootouts, the image just looks a little soft. 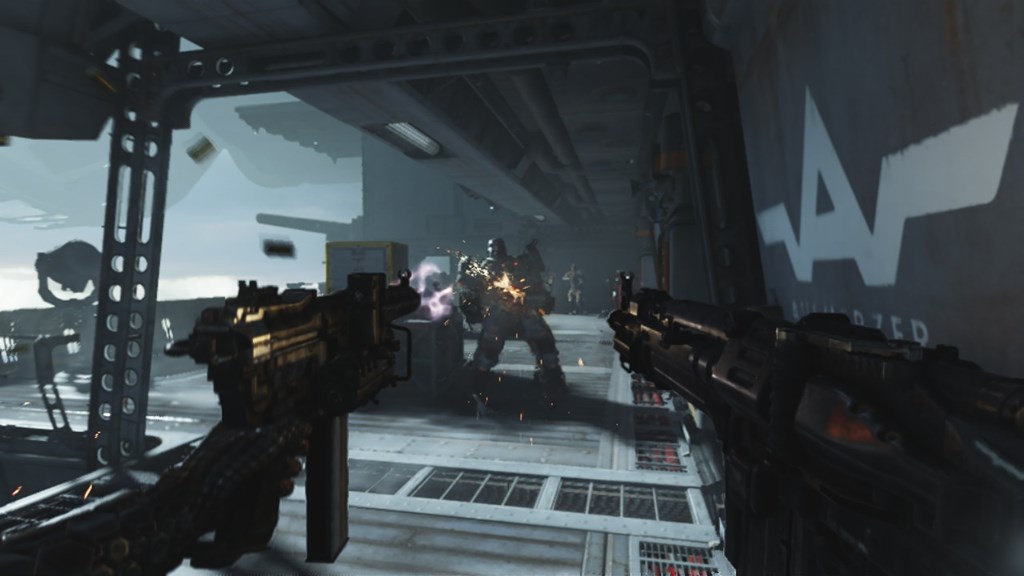 In those particularly hectic combat scenes, or whenever there are a large number of characters on-screen, the resolution drops to some absurdly low resolution, much lower than anything I ever saw in the Doom port. These edge cases can actually make it difficult to make out enemies against a pool of chunky out-of-focus pixels. Wolfenstein II is a more technically demanding game than Doom, so this extra strain of the Switch’s hardware makes sense, but here and there I get the sense that the game is falling apart at the seams in order to run at all. On the Switch’s small screen, the display resolution and various cut back textures and effects aren’t so egregious that they get so far in the way as to stop my progress, at least on the lower difficulty levels. If you’re planning on playing it as a docked game, all of these shortcomings are only blown up on a much larger display.

Regardless of the console you play it on, it’s probably best to knock Wolfenstein’s difficulty down to its easiest presets. The priorities of its combat design are conflicted, at times. For a significant portion of the game, The New Colossus wants to be played as a stealth game. Most encounters play out with B.J. stalking around some Nazi-occupied American facility in order to take out their commander before engaging in combat. If the player is caught before the commander is killed, he will keep calling for reinforcements until he is tracked down and eliminated in the fray. Playing on a harder difficulty means that Blazkowicz has the health pool of a stealth character, where getting caught means all but the best players will probably die. If Wolfenstein lets me dual wield shotguns while tanking enemy fire, then I’ll gladly knock the difficulty down in order to do so.

Gunplay feels too good not to take that option. B.J. himself has weight. He’s not a first-person floating camera with a gun; you can look down and see his legs, see his hulking shadow cast across the environment. He feels embodied in a way that makes something as innocuous as sprinting, let alone shooting, feel like a power trip. For a game that creates a world as absurd, yet hopeless and horrifying as this, it’s good that there’s at least some catharsis in just controlling Blazkowicz. His sheer one-man Nazi-killing power works within the story of the game and its steady escalation beyond the absurd. 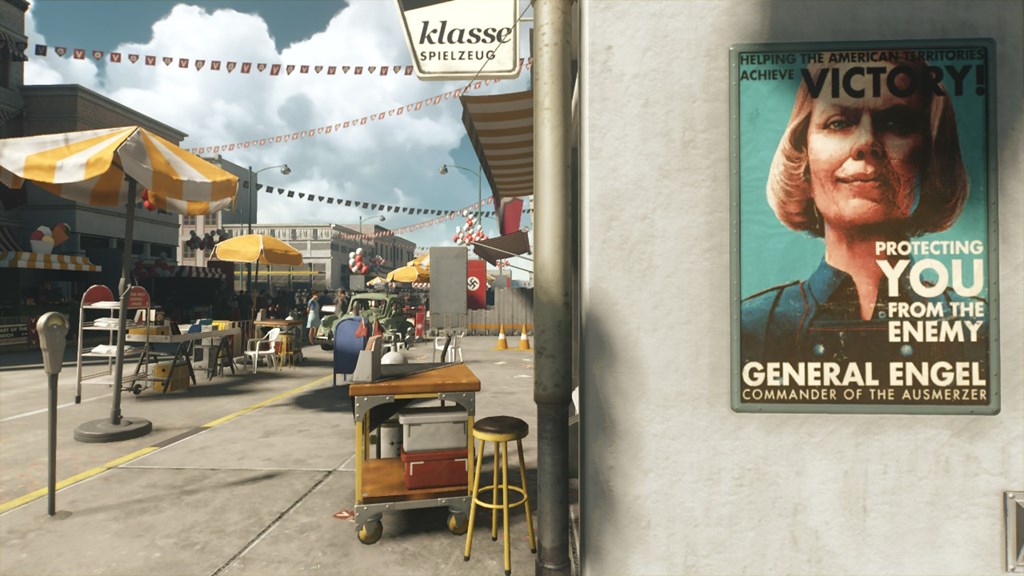 The New Colossus’s story is a lot. It’s dense with subplots and side characters, all of which are compelling, but some of which end up underdeveloped. The main question its story aims to address is what it takes to incite meaningful change in a hegemonic Nazi America. It never comes to any meaningful conclusion, if such a conclusion could be reached between the disparate allies looking to spark a revolution. Between B.J.’s less thoughtful patriotic American politics, the alternate history New York-based Black Panther resistance cell, and the seemingly anti-capitalist (and anti-Nazi) New Orleans resistance, there is a lot of interesting room to explore disagreements. While each group has a few scenes showing how their politics and interests push against one another, this aspect is unfortunately underdeveloped.

Nazism gets the most screentime and for the purposes of the overall plot, the most important aspect of these resistance groups is that they are outfitted by people who Nazis would see exterminated: those who are Jewish, people of color, LGBTQ people, people with various disabilities – anyone who doesn’t pass the aestheticized Nazi fascist ideal of the Aryan Ubermensch. The game takes aim at this facade that most media about Nazis seems to have internalized. There is no gauche, often unconscious romanticization of the Nazis as the hyper-competent organization of remorseless exterminators. In stealth sections, you can often overhear conversations between lackey soldiers or some bumbling commander taking orders from his higher ups, demonstrating a twisted, plausible, and not entirely alien kind of humanity. The robotic dog enemies that shoot flames from their mouths goes beyond the utilitarian needs of such a weapon. Real world Nazis officers didn’t need impeccably tailored Hugo Boss uniforms complete with striking logos and skull decorations either.

Despite its stylized eccentricity, Wolfenstein II keeps itself grounded when it explores what a Nazi occupation of America would mean to the ‘default’ white, middle class American. It doesn’t pull its punches in forgetting that America (or more broadly, the Americas) is a state founded on a deeply held belief in white supremacy. This is a continent founded on stolen land, hundreds of years of ongoing genocide of aboriginal people, and the exploitation of slave labor. Admittedly, as a Canadian I have a deeper knowledge of my country’s specific policies to the same ends. In Canada, the last Residential School was closed in 1996. Jim Crow laws in the United States were enforced into the 1960’s, and none of these were the end of over of subtle radicalized government policies. 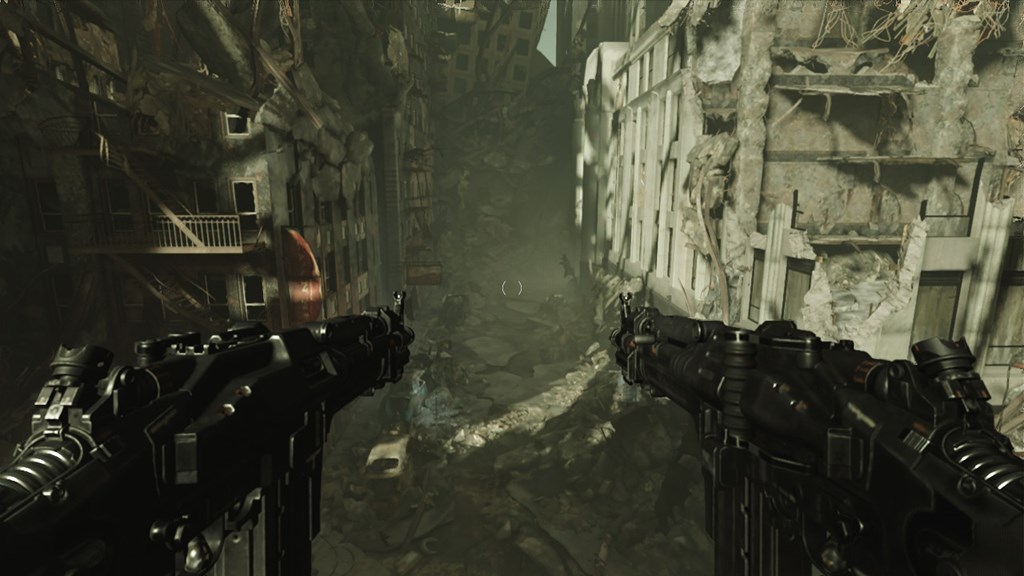 The America that we see in the childhood flashbacks of Blazkowicz, where his father is ready to beat him because he was seen socializing with a girl of color, is one that is entirely compatible with far-right Nazi politics. They exist, and they germinate within these white spaces. This still happens. Despite all of its absurdity, The New Colossus never loses sight of what America is, at its core, in its ongoing systemic injustices. It never goes for the easy line that white complicity in the policies of the Nazi regime is not America.

There’s a small throwaway line that Grace, the leader of the Black Panther resistance cell, says and in this moment it has stuck with me as a particularly poignant moment of irony in a script that’s peppered with it. As the resistance acquires a Nazi nuclear bomb, they question where to use it. One character reminds them that they shouldn’t just bomb civilians – that wouldn’t go far in helping inspire a people’s revolution. Grace responds, saying something along the lines of, “Of course I’m not gonna drop it on civilians. I’m not a Nazi.”

Wolfenstein II: The New Colossus continues the pleasant surprise of a Wolfenstein game having some of the sharpest writing of any big-budget video game, to the point of the value of its story eclipsing the admittedly fun (but quirky) shooting mechanics. As a Switch game, and more importantly as a handheld game, The New Colossus is more playable than I’d imagined. Provided you knock down the difficulty and can bear with the game’s dynamic resolution dropping to amazingly low levels at its most stressful points, this port is a perfectly fine way to experience the story and even have some fun shooting your fair share of Nazis – on the go!

Wolfenstein II: The New Colossus review copy provided by Bethesda for the purposes of this review.