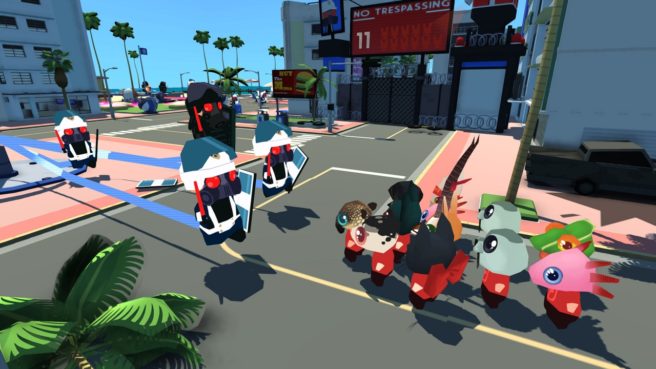 The riot simulator Anarcute is making its way to Switch, publisher Plug In Digital and developer Anarteam announced today. A digital release on the eShop is set for May 30.

Here’s an overview of Anarcute, along with a trailer:

Anarcute is both the cutest and the ultimate riot simulator. In Anarcute, the player gets to lead dozens of cute rioters that are determined to relieve the world from the rule of evil and sad forces who enforce their authority through the very very mean Brainwash Patrol.

Our rioters are ready to do anything, even if it means destroying whole cities to rebuild later. In order to recognize themselves, the rioters are adorable little animals, from cat to elephant or crocodile and many more to discover !. With a colorful and cute-Kawaii art style, Anarcute provides players with a cartoon and humorous experience.

It is time for cute revolution!

United we stand: In Anarcute you’re not controlling a single character but rather a whole crowd! The bigger the crowd, the more powerful it gets.

The city is your playground: Phone booth, fire hydrants, trash cans, bikes, cars… use objects from the city as projectiles. If your crowd gets big enough, you’ll even be able to take down whole buildings and make them collapse on your opponents!

Fight the Brainwash Patrol: Lasers, Electric Turrets, Spider Robots, Helicopters and Mortars are some of the many traps and enemies that will stand in your way

Spread the revolution across the Globe: During your adventure, you will get through 5 cities with unique visual and audio settings. From Tokyo to Paris and going through Reykjavik & Miami, the Brainwash Patrol won’t give you any rest. Explore every corner of the cities to find all the animals and customize the crowd to your taste!

– Lead a group of adorably cute rioters and wreak havoc all over the world in your fight against evil
– Pick up any object in the streets and throw those at the Brainwash Patrol
– Take down any building on your path and take advantage of the city’s layout
– Fight the Brainwash Patrol, a terrible force ready to do anything to stop you
– Explore the world and set it free!