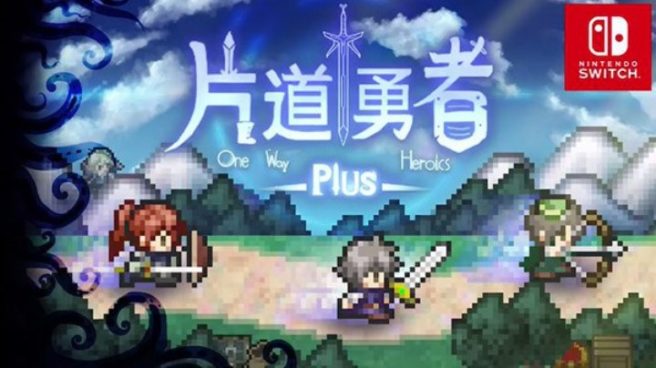 The RPG and roguelike game One Way Heroics Plus is heading to Switch, publisher Playism and developer Smoking Wolf have announced. It will launch as an eShop download on June 18.

Here’s an overview of One Way Heroics Plus, along with a trailer:

Experience a deeper, more engaging version of the hit roguelike!

Having sold over 200,000 units worldwide, this cult classic is back and bigger than ever, with new shortcuts, a fast forward function, automatic positioning, as well as an enemy/NPC encounter triggered pause feature, making the game more convenient to play, while major balance changes have also been implemented for a more compelling gameplay experience.

A character that combines the strength of a Knight and the intellect and versatility of a Force User.
Wielding a sword and the power of the Force, the Force Knight is an all-around well balanced class.

A character with high agility and powerful attack abilities.
Ninjas can dish out incredible burst DPS and move at amazing speeds, but all at the cost of their own life.

A seemingly pathetic class that comes armed with a camera, a travel journal, and awful stats.
It may be difficult, but if you manage to complete your travel journal… a special ending will definitely be waiting for you!

A Whole Bunch More Items, Skills, and NPCs!
More than 260 items in total!
Around 30 new skills and force powers!
Over 230 types of new NPCs!
And much, much more new content!