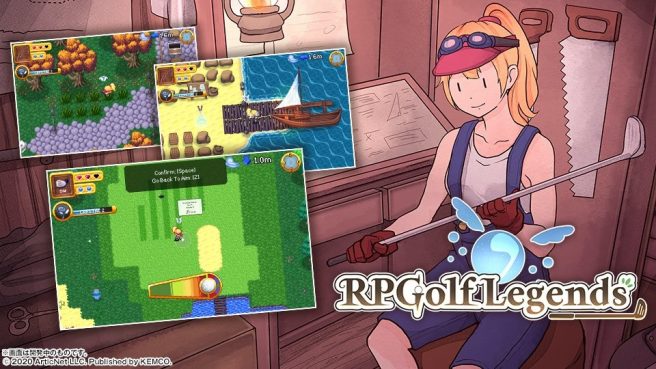 RPGolf, an RPG that first debuted in 2017, is now seeing a sequel in the form of RPGolf Legends. Kemco will be bringing the game to Switch and other platforms in the future in partnership with developer ArticNet.

RPGolf Legends offers a mix of action RPG, adventure, and golf gameplay. Outside of golf, you’ll be exploring the world, battling enemies, and making allies. A class system is included along with skills, special items, and more.

Here’s some additional information from the official overview:

An evil force has sealed all the golf holes in the world! Join forces with the spirit of a golf club and embark on a fantastic action-golfing adventure to save golf in the world!

Travel around in a unique open-world where monsters and golf coexist, get your best scores in 6 unique environments and beat monsters! When you are resting, do not forget to help people with their quests… every encounter counts!

Thanks to the class system, you will also get new skills, special items and a brand new look! Whether you spend your time golfing, fishing, crafting or exploring… is entirely up to you.

A fantastic journey is about to start!

We have a trailer for RPGolf Legends below.

RPGolf will be sold digitally for Switch via the eShop. The game is currently planned for release sometime in 2022.