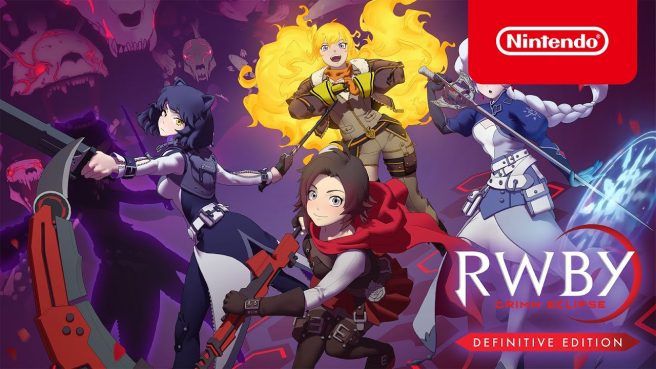 RWBY: Grimm Eclipse – Definitive Edition is coming to Switch, Aspyr and Rooster Teeth Games have announced. It will launch on May 13.

RWBY: Grimm Eclipse, which first launched in 2016, is a hack and slash game based on Rooster Teeth’s animated series. The Definitive Edition for Switch contains two-player couch cooperative play as well as eight additional outfits. All post-launch content updates are included.

In RWBY: Grimm Eclipse – Definitive Edition, join your friends in intense combat action as one of eight students of Beacon Academy and stop the evil forces of the Grimm and Doctor Merlot. Level up your favorite RWBY character and traverse Remnant in new storylines or the Grimm Gauntlet mode. Recruit your friends and team-up to save Remnant!

– Become the Ultimate Team – Team up with your friends in either two-player couch co-op or four-player online co-op and utilize powerful team attacks.
– Play as Your Favorite Characters – Play as Ruby, Weiss, Blake, Yang, and Team JNPR and unlock each character’s unique abilities and upgrades.
– Customize Your Style – Want to fight in the new Volume 7 outfits? Wonder what it’s like to run around Remnant in pajamas? Maybe you’d prefer to try out the exclusive, never-before-seen Power Armor? No matter your style, there’s plenty of outfit options for every RWBY fan.
– Immerse Yourself in the World of RWBY – Experience an exclusive and fully canon storyline with full voiceover from the cast of the show and an original score from RWBY‘s composer.
– Conquer the Grimm Gauntlet & Horde Mode – Prove you’re the ultimate Huntsman or Huntress by defeating waves of enemies and building defense turrets in challenging alternate game modes.