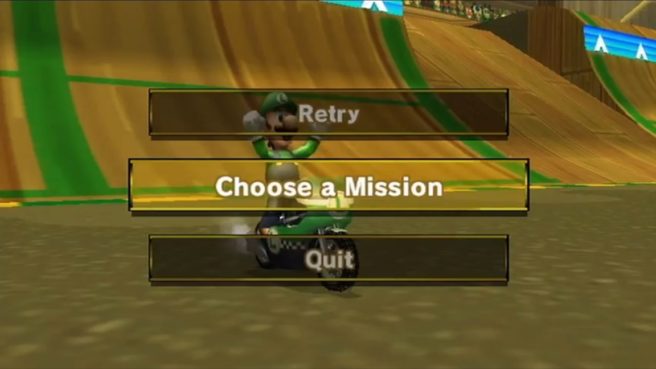 Mario Kart DS introduced the very neat Mission Mode. It had you completing various objectives, such as racing backwards through a course. The mode even featured a number of boss battles.

The next Mario Kart game, Mario Kart Wii, was going to include its own Mission Mode at some point before being ultimately scrapped. After nearly a decade, a new discovery from MrBean35000vr reveals some of the leftover content.

As for how MrBean35000vr managed to find Mario Kart Wii’s cut Mission Mode and why it took so long, he explains:

So, you may be wondering, how has nobody found this before now? The reason all this took so long to find is just because the game doesn’t try to load these screens at all, ever, even on the menus that would once upon a time have contained them. So in order to get at them, you’d have to convince the game it was supposed to load them first, which I did, and then politely asking them to render actually works! Moreover, these screens change the game state into an unused mode, similar yet different to that of Competition and Tournaments, revealing a bunch of features that were once part of Mario Kart DS, hiding away in the depths of Mario Kart Wii’s code.

The menus for Mission Mode have no available text, but the game is trying to load them; they’ve simply been erased. Similarly, a massive file that would’ve contained mission parameters is not present, and without it, the mode can’t start – UNLESS you simulate its existence, which is what I did. It attempts to load files out of the /Race/MissionRun folder on the disc, but that folder is empty, but that affects nothing since that folder would only have contained extra data (like where to place goombas or similar). As such, I was actually able to play a few games with the game in Misson state, and show off some of the game modes.

The full video from MrBean35000vr is below. It shows the following objectives:

MrBean35000vr believes there are other objectives in Mario Kart Wii’s Mission Mode, but he’s trying to get to the bottom of them. He believes that in order for that to happen, he’ll likely need to add files to the game.

Side note: Mission Mode is one of the reasons why Mario Kart DS is my favorite Mario Kart entry. When will you bring it back, Nintendo?!