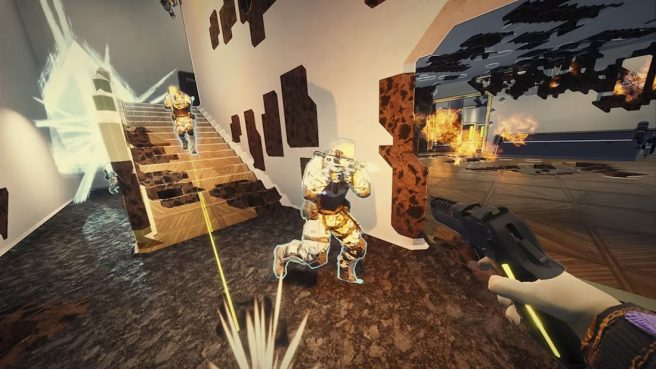 Severed Steel, a single-player FPS from Digerati and Greylock Studio, has received a new round of gameplay. We have 15 minutes of footage from the just-released version for Nintendo’s console.

Severed Steel is a single-player FPS featuring a fluid stunt system, destructible voxel environments, loads of bullet time, and a unique one-armed protagonist. It’s you, your trigger finger, and a steel-toed boot against a superstructure full of bad guys. Chain together wall runs, dives, flips, and slides to take every last enemy down.

Key Features:
A unique fighter – Play as Steel, a nimble, one-armed sharpshooter on a mission. There is no reloading – pick your shots well and be ready to pry a loaded weapon from your enemies’ cold dead hands.

Stylish combat – Dodge bullets, leap off walls, slide kick, throw weapons – do whatever it takes to come out on top in intense and frenzied firefights.

Dynamic AI – No two battles are the same thanks to dynamic, unscripted, squad-based AI.

Firefight Mode – Chase high scores and fast times for leaderboard acclaim in this arcade-styled mode. Features 42 levels, each with their own sub-challenges, and over 20 unlockable, game modifying ‘Mutators’.

Campaign Mode – Blast through six compact story chapters as you battle against the forces of nefarious mega-corporation, EdenSys.

Accessibility – A range of adjustable settings for features such as difficulty, visuals, audio, controls, navigation, and more.

Find the gameplay for Severed Steel on Switch below.