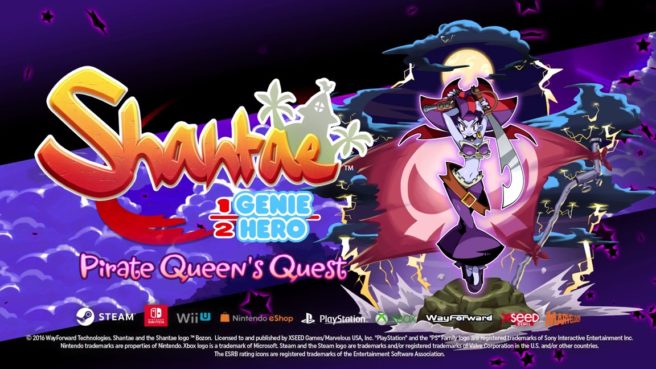 Pirate Queen’s Quest, premium DLC for Shantae: Half-Genie Hero, is arriving this summer. It’ll be available on both Switch and Wii U upon release.

We’ve attached a trailer and details for Pirate Queen’s Quest below.

Just as Shantae and her inventor Uncle put the finishing touches on the powerful new Dynamo, the bodacious buccaneer Risky Boots shows up to steal it!

Playing the role of the evil pirate, it’s your job to find the FIVE COMPONENTS you’ll need to upgrade the Dynamo and bend Sequin Land to your will! Pillage, loot, and plunder your way to the ultimate showdown against the Half-Genie runt and win the day for pirates everywhere!

• Take on any world in any order!
• Slice your foes to ribbons with Risky’s Scimitar, or blast away with her Pistol!
• Master Pirate Gear like the Bomb Shot, Grappling Hook, Hat Glide, Cannon Jump, and more!
• Deploy Tinkerbat crewmen to turn the tide of battle!
• Collect Cursed Magic to customize Risky’s abilities any way you like!
• Brand new enemies, puzzles, and storyline!