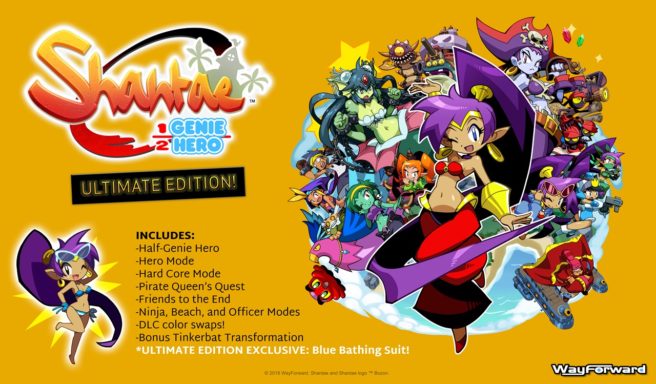 Here’s a recap of everything else in the package:

In addition to the bevy of vivid, detailed high-definition graphics that made this newest entry in the Shantae series a fan-favorite, the Ultimate Edition includes even more modes, monsters, and platforming action! ‘Pirate Queen’s Quest’ allows players to take on the role of Shantae’s arch-nemesis, Risky Boots, in a whole new storyline! ‘Friends to the End’ features ethereal new levels and a special boss encounter as Shantae’s pals Sky, Bolo, and Rottytops enter her nightmare to try to save her from certain doom, while ‘Costume Pack’ provides three new arcade-style adventures – harness the power of the Ninja, Beach, and Officer costumes in these brand new side-stories!

Shantae: Half-Genie Hero – Ultimate Edition will be out this spring.