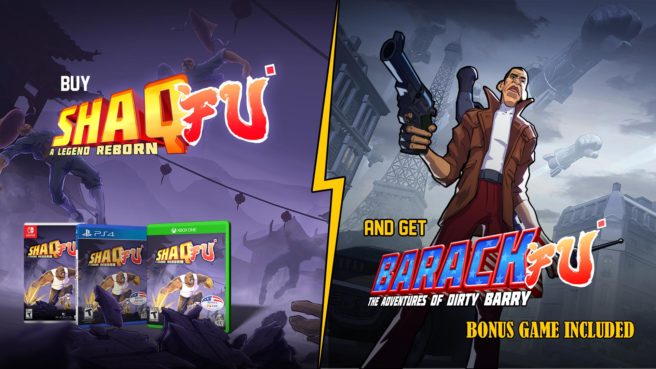 Have you purchased a boxed copy of Shaq Fu: A Legend Reborn? If so, you can gain access to the newly-revealed Barack Fu: The Adventures of Dirty Barry bonus game at no extra cost.

Barack Fu features former US president Barack Obama in a way we haven’t seen him previously. We have more information about the DLC plus a couple of trailers below.

This independently created and produced game features a brand new hero, this one is not an endorsed celebrity but a parody of one of the greatest heroes of our time. Some fool has been icing celebrities and he ain’t slowing down. When the fuzz can’t crack the case and the private dicks don’t have a clue, Dirty Barry gets the call. Jet to Paris and even outer space, battling crazy bosses and their mad minions as the ex-POTUS-on-notice dispenses justice for all.

– Battle fashionistas, politicians, robots, clones, hackers, flying derrières, and rappers with your raw fists and smoking hot lead.
– Call in a “Peace Prize” drone strike to flatten your foes in an instant.
– Slip into Dirty Barry mode and rack up a killstreak with your handy assault rifle and an abundant supply of grenades.
– Take out the bad guys from a distance with a variety of firearms, including a shotgun, railgun, and machine gun.
– String together power moves like the Barack ‘n Rolla and South Side Smash to create devastating combos.