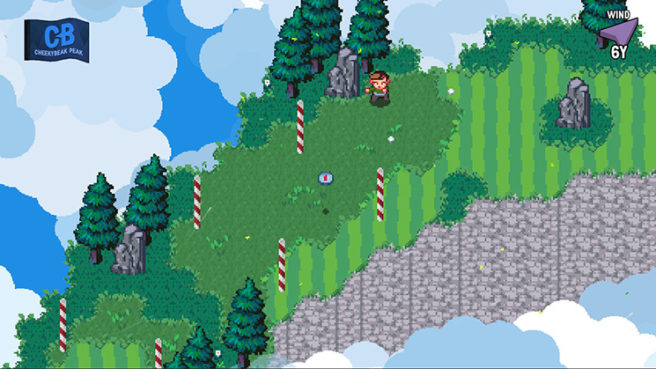 Nintendo published a new interview this week with Andrew Newey, the designer of Golf Story. Newey spoke about a few topics, including why the decision was made to create a game based around golf, how certain aspects came together at the very last minute, and more.

Here’s a full transcript of the interview:

Is there a specific reason why you went with golf? What about golf complements the game you wanted to make?

It’s as simple as I love golf and I always wanted to make a game about golf. I wanted to create the vibe of golf more than anything – the sounds, sights and characters. Something about it all just feels respectable. Having said that, golf also gives a lot of freedom to the player. A golf ball can be hit from any location, at any time, over distances great and short. So, it gives a lot of options for challenges and exploration verses other sports that are about reaching to something else happening.

The story is an interesting mix of lighthearted silliness and drama. How was it developed?

We had lots of ideas about what kind of weird courses we wanted to make, so we picked some of those first. Then we had a lot of scenarios we wanted to include so we noted them all down: A retro course with vintage clubs, cheeky moles stealing golf balls, using golf clubs to dig up treasures, etc. Then the story came together naturally to tie all the scenarios together. The silliness is inherent in the concept of the game itself so it just comes up automatically. The best dramas are always on the verge of being comedy.

Is there something about this game that you’re particularly proud of?

Since you could hit your golf ball freely, I wanted things in the game world to react to getting hit to encourage players to experiment. With this in mind, we added secret holes, challenges and scenarios that would occur from hitting your golf ball at the right things. I even gave every person in the game a unique on-hit dialog in case somebody happened to throw golf balls at them. I’m proud of how it came together, and I think the game rewards experimentation pretty well in the end.

Do you have a development story you can share?

We had a pretty stressful ending to the development of the game, to the point where we were counting the individual hours that we had left to accomplish certain tasks. One night, I realized we needed the final golf course finished within a few hours, and I hadn’t yet started it. To solve the problem, I took a hole from each of the previous courses, replaced their graphics and made a few changes while elongating them at the same time to make them harder. It ended up as a bit of a homage to the rest of the game and, in the time i saved, I was able to finish making retro manuals for the Galf mini game. I think those were appreciated more than the final course in the end.

What advice do you have for those who want to become game developers?

My advice would be to only make the game you really want to make, and always try to make it everything it could be. You might fail to make it or do it poorly, but you’ll probably improve at the same time.

A good way to find out if you’re making the right game is to question whether you would play your way if it were made by somebody else. If the answer is no, it’s probably not going to turn out well. We used this test to cancel some games that we had tricked ourselves into thinking were good ideas. So that’s my main advice.