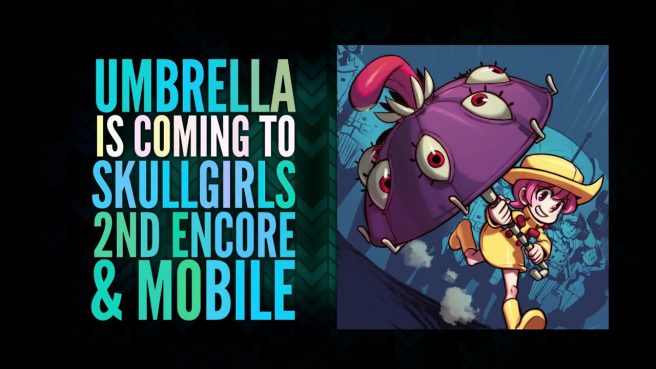 Umbrella has been revealed as the latest new character for Skullgirls 2nd Encore. She’ll be offered as part of the game’s new Season 1 Pass.

Here’s a proper introduction to Umbrella:

While Umbrella is still very early on in development, we wanted to share some details about where her gameplay direction is heading at the moment. Please note that this is all HEAVILY subject to change after further testing and development, and the terms used to describe her toolkit and states are a work in progress…

Umbrella is a small character with BIG swings thanks to her living weapon, Hungern. While she is slow with limited movement options, she can use special moves to approach with some risk.

Most of her attacks will involve Hungern in some way. Hungern will get hungrier as the match goes on or after performing certain actions, and his hunger level will influence his move properties.

For example, If Hungern is STARVING, normals that use him are slower, but moves that involve devouring the opponent are stronger. If Hungern is OVERSTUFFED, moves that involve him conjuring something from the depths of his stomach may have bonus effects. Hungern is quite RAVENOUS and dangerous when he is hungry but not yet STARVING – expect to be rewarded if you can maintain this narrow window of power! Umbrella players will have to manage Hungern’s hunger level or at least adapt to how her moves change based on Hungern’s state.

Annie was previously announced as the first character in Season 1 Pass. There’s no word on when the new content will be offered on Switch, but there are plans to support the console in the future.