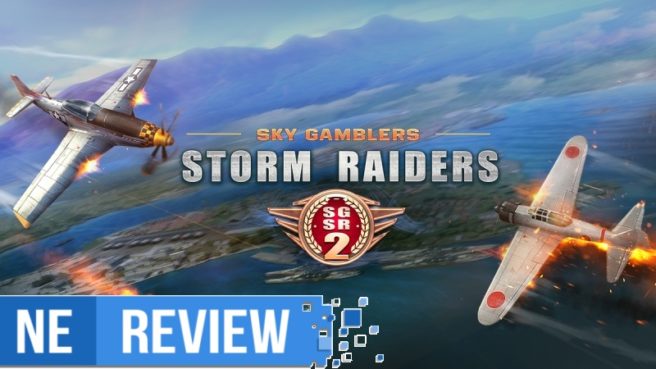 Of all the genres most cruelly under-represented in modern gaming, I feel it’s the humble air-combat sim that tops the list. What was once a regular showing during the 90’s and 00’s has since withered away in significance, and outside of a handful of current and last-gen Ace Combat games, there has been little else to fill the void – especially on Nintendo’s hybrid console. As a result of this drought, I couldn’t deny my intrigue once I learned of Sky Gamblers: Storm Raiders 2’s presence in the Switch’s release calendar. The mere mention of high octane dogfights and World War II aircraft are a sure fire way to get me interested (I may still be 12, need to check). What I failed to anticipate was the mobile heritage of the franchise that makes itself blisteringly apparent once you fire the game up.

Sky Gamblers: Storm Raiders 2 is a mobile game through and through. Now, this doesn’t necessarily have to be a bad thing – a couple of well executed free-to-play mobile conversions already exist on the eShop, but there are certain inherent design elements that must be reconsidered in order to appeal to either mobile or console players – UI being one of the most crucial. Sky Gambler’s UI has been barely altered in its transition from mobile to console, and at its best it’s an unpolished, poorly designed relic reminiscent of mid 90’s shareware games – at its worst, it’s borderline unusable thanks to the twitchy implementation of hardware controls used to get between sections. Thankfully you can at least easily navigate the menus using touch controls, as you would within the mobile version – even though the game never tells you that you can. 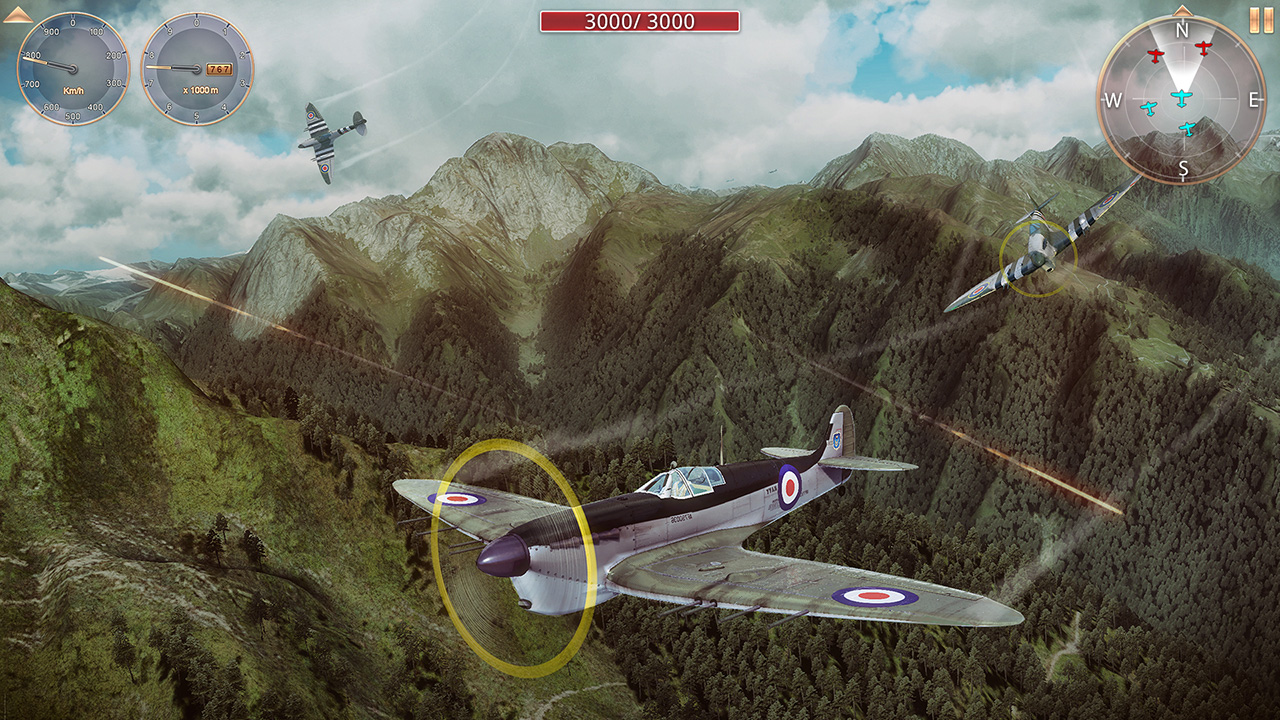 Once you’re strapped into the cockpit, things get far more intuitive over the course of the games twelve mission campaign. From Pearl Harbor to the Western Front, a respectable amount of work has been put into differentiating the look and feel of each new location from the last, even if there is a slightly dated “mobile” feel to the overall presentation. Cutscenes for instance, play out as simple camera cuts between planes with dry, single-sentence text boxes jutting into view from the top of the screen. Objectives have a tendency to shift unpredictability as events unravel, and there’s a decent variety of ground, air and sea targets for you to juggle your attention between which serves as a decent emulation of the high-stakes nature of real air combat.

Although the game prominently features some of the most pivotal air and sea battles of World War II, you can forget about there being anything in the way of a compelling narrative beyond the already apparent historical significance of these events. Excluding the twelve campaign missions, which all come in around 10 to 15 minutes in length, there’s very little else on offer – you can set up a custom game with bots any of the included maps, or jump online for some multiplayer dogfights to unlock more planes – but that’s just about all there is to it. 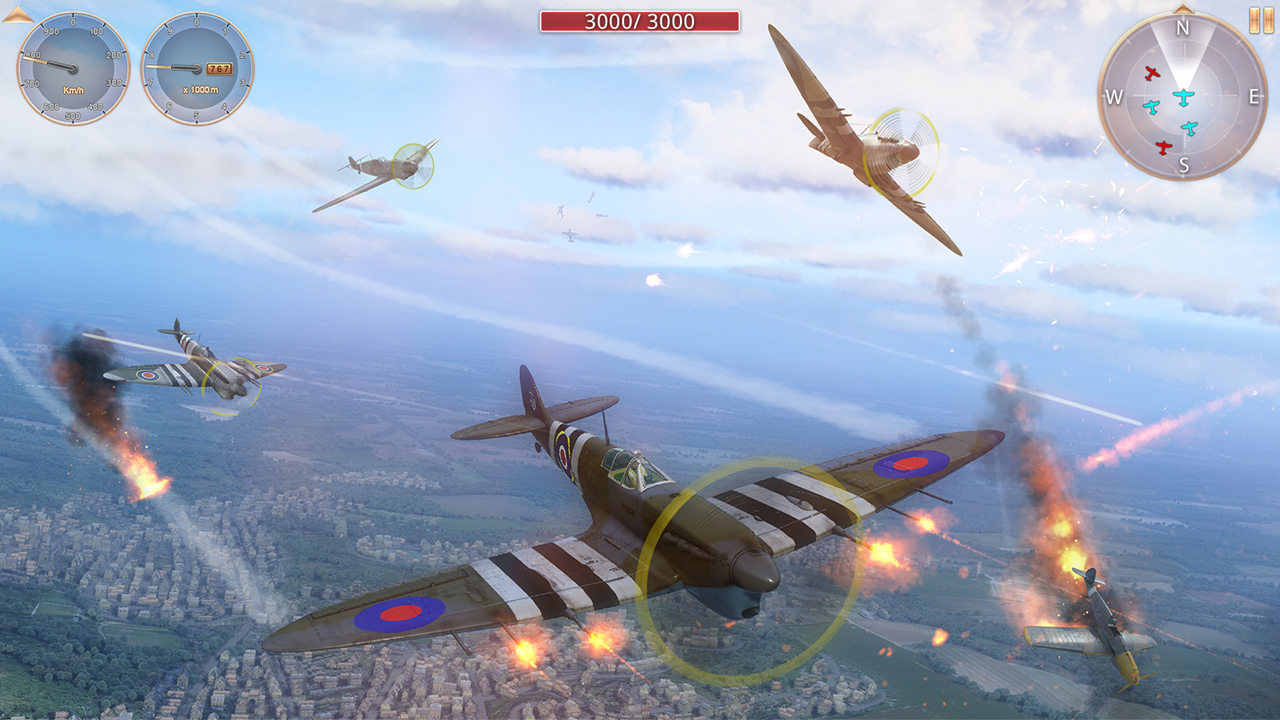 As far as the aerial combat itself goes, it’s serviceable but far from what any would consider a simulation. It’s got a light, arcade feel that – like much of the game – has a distinct made for mobile sense of feedback to it. There are three control schemes to choose from – two “simulation” presets that offer full control over pitch, roll and yaw, and one casual preset that uses tilt controls for aiming. I found that that the most engaging way to play Sky Gamblers was by opting for the default simulation preset and switching your view to the game’s cockpit camera, which is by far the standout feature for me. The attention to detail and sense of place within the cockpit as you down a group of bombers, scrape through their descending wreckage and evade pursuing fighters can often times impress for a mobile game – but as a console experience, there’s perhaps not enough weight and polish to the entire endeavor. Sound for instance, is one area in which the game is let down immensely – the music sounds like it has been sourced from some royalty free MP3 hub of dubious quality, and the few sparse samples used for weapons and dialogue are relied on so heavily that they lend the game a cheaper feel than it necessarily deserves.

Taking the entire package into consideration, it’s difficult to recommend Sky Gamblers: Storm Raiders 2 based on a couple of different factors. The value, for one, isn’t great – the game is short, very short – and it’s currently four times the price of its mobile version. Granted, one could forgive the price differential if significant work had been put into making Sky Gamblers feel like it belonged on a console, but that’s not the case either thanks to the like-for-like mobile UI and clumsy button mapping. Technically, the game doesn’t do much to restore confidence thanks to a jittery frame rate – it often struggles on Switch to keep the action stable once things get hectic. On the whole, I feel that all but the most devoted aerial combat fan should sit this one out – and even those who do wish to take to the skies would be much better off grabbing the game on mobile to enjoy as a rapid-fire lightweight distraction at a quarter of the price.

Sky Gamblers: Storm Raiders 2 review copy provided by Atypical Games for the purposes of this review.