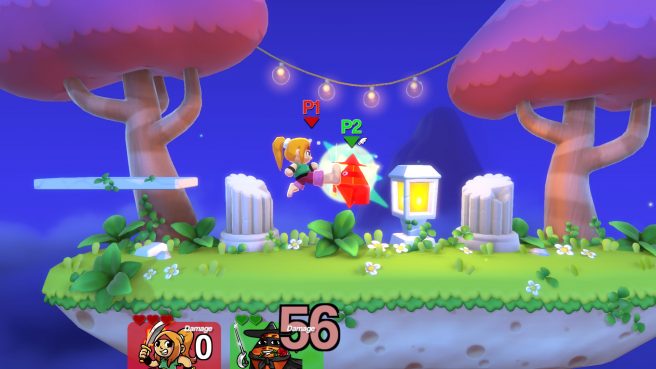 The platform fighter Slap City has received a surprise release on Switch. Ludosity hadn’t announced the title for Nintendo’s console previously, but it’s out now.

Ludosity was one of the developers behind Nickelodeon All-Star Brawl. This one plays a bit similarly, and features a variety of characters such as Ittle Dew and Princess Remedy. The game offers “customizable controls, online crossplay, single-player story modes, and a farcical amount of bonus content”.

Choose from a pile of Ludosity-related characters like Ittle Dew and Princess Remedy, and throw down on stages ranging from competitive to absurd. With a humorous style, customizable controls, online crossplay, single-player story modes, and a farcical amount of bonus content, Slap City is fun for all players.

Take a break with Slap Ball, the sporty mode where the ball is worth more points the more you punch it, or learn the city’s dark secrets in one of eight Story mode campaigns. Welcome to Slap City!

·Smooth, accessible gameplay with competitive depth.
·Four-player local play and online cross-platform play with customizable rules in lobbies for up to 12 people.
·Versus, Teams, Slapball, Ranked, Story, Arcade, Smack the Crystals, Replay and Training modes.
·11 characters from our previous games you’ve never heard of, including Ultra Fishbunjin 3000, Assassin Asha, Cruiser Tetron and Orka.
·34 Versus stages and 6 Slap Ball stages.
·Story campaigns for eight of the characters, including a shared set of platforming stages with enemies, bosses, and devious secrets.
·Unlockable character outfits and interviews, secret move lists, concept art galleries and music.
·Every facet of gameplay is detailed in the How to Play section, including the unique properties of special moves.
·Over 100 songs both original and remixed from the Ludosity library, including three songs with lyrics by Lemonic Diva.
·Any future characters, stages and game mode additions will be free.

Have a look at a trailer for Slap City below.

The game is now available on the Switch eShop for $19.99.