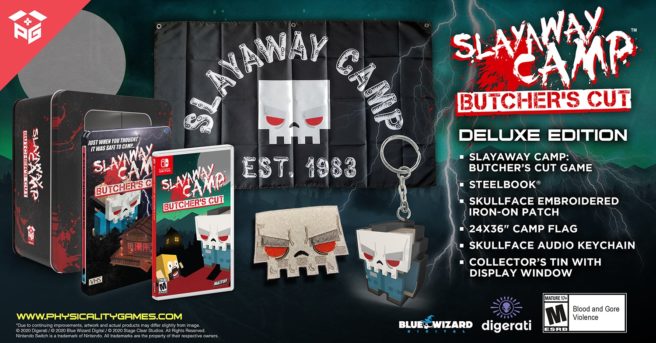 Slayaway Camp: Butcher’s Cut, an isometric puzzle game that first debuted on Switch as a digital download in March 2018, is getting a physical release. Physicality Games announced a partnership with Digerati and Mastiff to produce the physical version, which will be available to pre-order later this month.

Slayaway Camp: Butcher’s Cut will be offered in standard and deluxe editions. With a regular copy, you’re getting a copy of the game and a collector’s tin with a clear display window that shows off the game’s cover artwork. The deluxe edition comes with those two items and adds a themed steelbook, Skullface embroidered iron-on patch, 24×36” camp flag, and Skullface audio keychain. All collector’s tins are sequentially numbered.