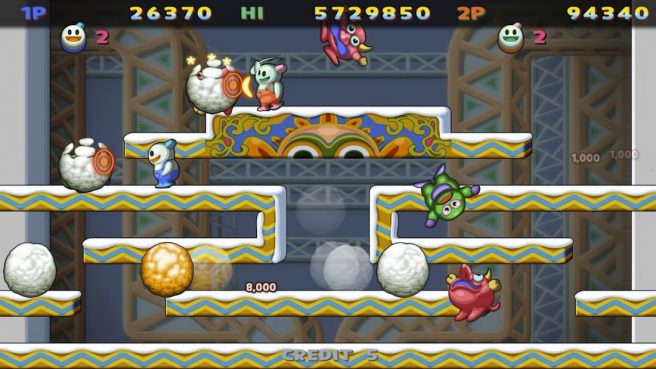 Gameplay has come in for Snow Bros. Special, a redone version of the arcade classic for Switch. We have 18 minutes of footage in total.

Learn more about Snow Bros. Special in the following overview:

Snow Bros. is an arcade game developed by Toaplan.

In this fun and easy-to-play adventure popular for gaming among couples and with friends, two snowball-hurling snowman brothers power their way through against various enemies.”

All is well in peaceful Snowland.
Then one day, King Artich of the Hottoda Kingdom invades Snowland.

The twin princes of Snowland, Nick and Tom, try to stop him…
But King Artich curses them and turns them into snowmen.
He takes the twin princesses Puripuri and Puchipuchi captive.
In this state… all of Snowland will soon melt away.
Nick and Tom embark on a long journey to return peace to Snowland.

“We must rescue the princesses and lift the curse”
“Let’s go! Snow Bros.!!”

Take a look at the gameplay for Snow Bros. Special below.