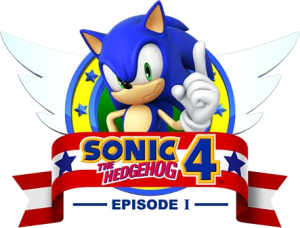 It goes without saying that most modern Sonic games haven’t exactly been great. After the hedgehog made the jump from two dimensions to three, he’s been stuck in a downward spiral filled with annoying animal friends, werehogs, and bizarre interspecies romances. Sonic needed a return to his glory days, and who better to attempt this than the developers of the surprisingly good Sonic Rush and the Sonic Advance series, Dimps. With Sonic 4, Dimps were tasked with creating a Sonic game that would both bring back fond memories of Sonic Team’s early games on the Sega Genesis and Mega Drive, still be an entertaining 2D platformer, and please Sonic’s unappeasable fanbase. Did they manage to pull off all of these things? No, not really. 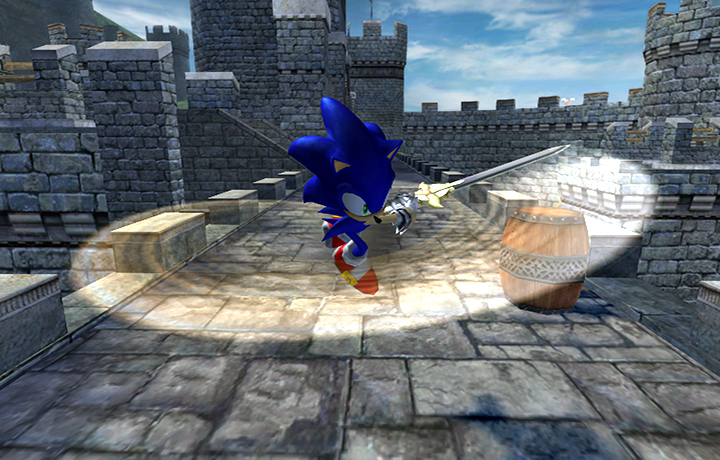 But it’s still much better than this.

Let’s start on a positive note. Sonic the Hedgehog 4’s controls are as simple as ever, with only the D-pad and one button used to control Sonic. With the Wii remote held sideways, tapping the 2 button mid-air causes Sonic to launch into a homing attack, a new addition that works surprisingly well. It can be a bit finicky when there is more than one target around, but for the most part it complements the game nicely, allowing Sonic to bounce effortlessly from one target to the other to reach hidden places. The storyline is also as simple as it used to be. Dr. Eggman is trapping adorable animals; go collect chaos emeralds and destroy his stuff!

The way Sonic moves and the game’s overall physics have been criticized by plenty of people for not being completely faithful to the first few Sonic games, but I didn’t really have a problem with them. It’s true that he does speed up slower and stop faster than he did before, but given that the developers listened to feedback and did end up making Sonic accelerate faster than he did in early demos, I can’t fault them for at least trying to get it right. Sonic might not move exactly the same as he did on the Genesis or Mega Drive, but the physics still work. Personally, I didn’t mind the fact that Sonic now slows down a lot faster as it made it a lot easier to bring him skidding to a standstill before he went flying into one of many badniks placed directly in his path. That’s not to say there aren’t still plenty of cheap deaths – the game just rewards players with plenty of extra lives to compensate for the often-unfair enemy placement and numerous unmarked bottomless pits. Unlike most Sonic games, once the first zone is cleared, the other three can then be attempted in any order. It’s nice that the game is a lot less linear, but it makes the difficulty curve seem a bit uneven. 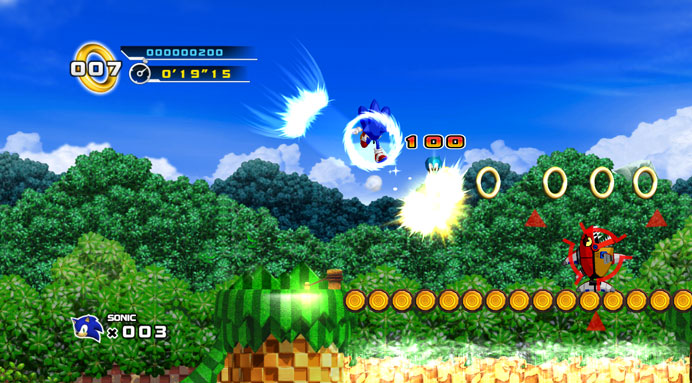 This screenshot might be from the high-definition version of the game. It doesn’t really matter because the Wii version looks almost identical.

So how many new ideas and gameplay mechanics does Sonic 4 bring to the series? Beside the homing attack (which was already a staple of the 3D Sonic games), there’s really nothing new here. Levels are full of “been there, done that” moments, like when Sonic is used as a pinball in the Casino Street Zone or swept down an infinitely looping waterslide in the (Lost) Labyrinth Zone. Similarly, all of Eggman’s mechs have been recycled from previous Sonic games, although these bosses do have a few new attacks so they don’t feel completely stale. Some of the levels add a few gimmicks like mine cart rides and running on top of rolling boulders that might be new to the series, but they’ve already been done to death in hundreds of other platformers before. There’s a clear lack of originality here.

Given that Sonic the Hedgehog 4 is a tribute of sorts to the original Sonic games, it makes sense that the worst parts of the original games are still present. On top of the cheap difficulty and linear acts, Sonic 4 continues one of the worst ideas ever brought to the series – underwater levels. Sonic 4 only really has two of them —throwbacks to Labyrinth Zone from the first Sonic the Hedgehog— but they’re both terrible. Some of the levels also have a few puzzles thrown in, which feel incredibly out of place. Sonic was never about going fast all the time, but these levels don’t break up the pace so much as bring it to a complete halt. In short, they’re not much fun. 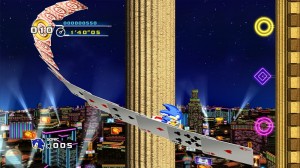 Running on a road made of playing cards is definitely a highlight, though.

Jun Senoue, the composer of Sonic the Hedgehog 3 and just about every Sonic game since then handled the game’s soundtrack. He tried to recapture the sound of older Sonic titles in his music, going as far as limiting himself by using only eight notes per song, but the end result isn’t spectacular. It’s great that Senoue went with a more “retro” style of music than the butt rock we’ve come to expect from modern Sonic games, but very few tracks from the game’s soundtrack struck me as being particularly memorable or well-composed – especially compared to Masato Nakamura’s work on the first two games. The music in Sonic 4 tries to recreate the Mega Drive/Genesis synth but doesn’t quite sound right. Like the game’s physics, the music fails to feel authentic. The sound effects, on the other hand, are virtually unchanged from the first Sonic game. From the jingle of collecting rings to the bizarre yet charming noise Sonic makes when he jumps, the classic sound effects are covered perfectly.

The graphics are also a high point. The levels are all 2D but 3D models are used for Sonic, Eggman and all the badniks you fight. They don’t look particularly detailed, but they get the job done. It’s also worth noting that the badniks keep their original designs from the first three Sonic games, which feels like a nice touch rather than just the developers recycling old material. And yes, they still explode into a variety of cute animals when you destroy them. 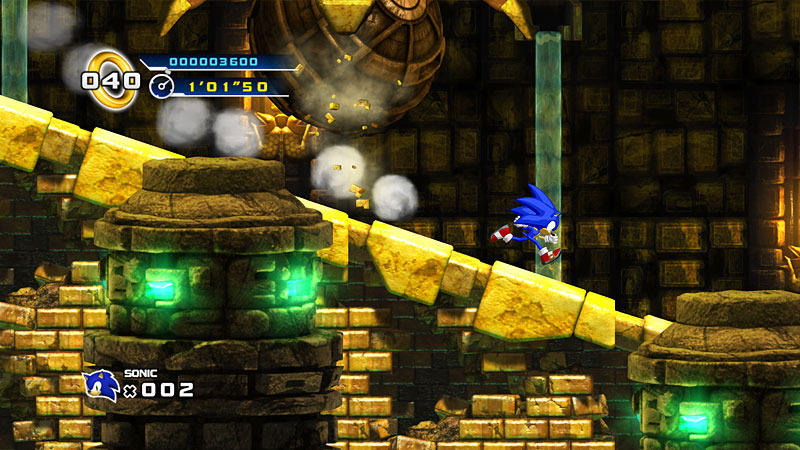 The environments are bursting with detail, too.

When I review a game, I rarely criticize its price, but considering that Sonic 4 will probably never move from its current price point of 1500 Nintendo Points, it feels like the game doesn’t have enough content to justify buying it. There are only four zones (five if you count the final boss rush), each with three acts and a boss, but you should be able to speed through the whole thing in an hour or two. Sure, there’s a time attack mode and a few bonus stages to add a bit of longevity, but Sonic 4 ends up feeling too short, even compared to other games in the series. I’m sure that once all three episodes of Sonic the Hedgehog 4 are out, the game will be just as long as, say, Sonic 3 and Knuckles, but by that point it’ll cost nearly the same as a full-price Wii game and, unless the next few episodes get their acts together, the 2D Sonic formula feels too shallow to justify paying $50-$60 for in 2010.

Sonic the Hedgehog 4: Episode 1 isn’t necessarily a bad game, but it’s still tough to recommend. As a throwback to older Sonic titles it fails because it doesn’t look, sound or play exactly like the original games and as a new Sonic game it fails due to a lack of any innovation and the fact that some elements of the gameplay are painfully outdated by now. Ultimately, it feels like Dimps and Sonic Team sitting back and going “remember when Sonic used to be fun?” rather than actually trying to make their iconic character relevant again. There’s definitely a lot of potential here, though, so I hope that the next episode of Sonic the Hedgehog 4 brings something new to the table rather than simply rehashing old material.