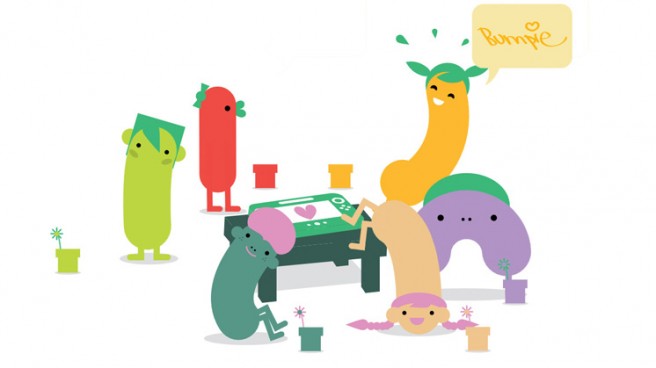 Spin the Bottle: Bumpie’s Party’s update will be available on February 13, KnapNok Games has confirmed.

Those who previously downloaded the game can receive the update for free. However, Spin the Bottle’s price will increase for $11.99 / €8.99.

The upcoming update offers six new mini-games in total, making use of the GamePad’s features like the camera, gyroscope, face and smile detection, touch screen and thumb sticks.

You can find the full rundown of Spin the Bottle: Bumpie’s Party’s update below.

The new GamePad themed update of Spin the Bottle: Bumpie’s Party will be available on February 13th. The update introduces 6 new minigames focusing on the technology of the GamePad such as the camera, gyroscope, face and smile detection, touch screen and thumb sticks.

The update will be free for owners of the game, but after February 13th the price of the game will increase to 8.99€/11.99$. This pricing structure is new to console games:

We are basically trying to do “DLC’s done right”. Instead of trying to milk extra money out of your hardcore fans and early adopters, we reward them with free content. New customers will have to pay a bit more, but they are also getting a better game for the money so I don’t really see anyone losing. Says Lau Korsgaard, Creative Director in KnapNok Games.

The update will include:
– The six new minigames that lets you photograph, tickle, twist and mime for each other, bringing the total number of minigames up to 23.

– We are taking pictures of you while you play! View them later in the gallery for laughter or embarrassment.

– Lots of new bonus challenges added for even more variation.

– TV settings: finally you can decide what is shown on the TV by choosing between classic, campfire, clone or camera mode.

– Plus lots of small tweaks and fixes

Act like an Animal
A classical charades game! The GamePad shows a picture of an animal, one player has to mime it, the partner have to guess it. Can you mime a gorilla, a kangaroo or a crab? What about a unicorn, worm or a T-Rex?

Put your Hat on
Use the GamePad screen and camera to search around the room for virtual hats placed in the air. One player positions themselves with the hat on their head. The partner simply has to take a picture.

Footie Ball
A game of two, playing ball on the GamePad, using only their feet.

Nature Photographer
In nature photographer two players holds the GamePad at the same time standing shoulder to shoulder. They now have to search the room for a butterfly and take pictures of it. This requires tight communication and coordinated movement.