Spinch getting a physical release 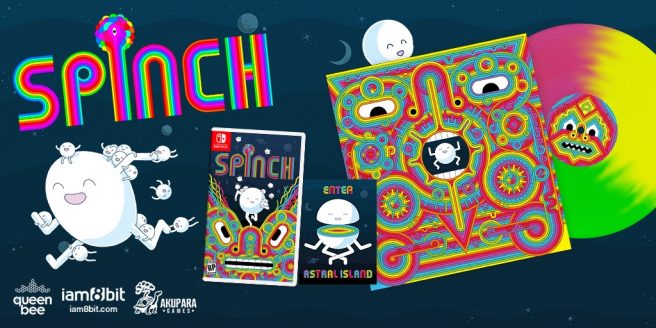 iam8bit, Akupara Games, and Queen Bee are teaming up on a physical version of Spinch. The “transportive side-scroller” was previously offered only as an eShop download.

Here are the full details on Spinch’s physical release:

In collaboration with developer Queen Bee and publisher Akupara Games, as well as sui generis cartoonist-creator Jesse Jacobs, iam8bit is thrilled to announce its exclusive physical edition of Spinch for Nintendo Switch, along with a vinyl release for its giddily circuit-bent soundtrack by avant-garde composer James Kirkpatrick (Thesis Sahib). Both releases will be available to pre-order on iam8bit.com on Wednesday, January 27 at 10 a.m. PST.
iam8bit’s physical edition for Nintendo Switch (priced at $34.99, expected to ship Q2 2021) is a true collaborative effort with Jacobs, who designed the artwork, a reversible cover sheet, and an exclusive illustrated zine to further expand the wacky outer worlds of Spinch. The region-free release will be compatible with systems worldwide.

For those hypnotized by Thesis Sahib’s acid-dipped Spinch soundtrack, a series of fantastical compositions created on a modified Game Boy and repurposed circuit-bent toys, iam8bit brings it to wax with a fittingly far-out, obscenely vibrant LP – complete with a gorgeous tricolor vinyl, die cut “Mouth Portal” jacket designed by Jacobs, and one of three limited-edition art prints. The Spinch vinyl LP is priced at $29.99, expected to ship Q3 2021.

Both releases are retro-styled to reflect the psychedelic, color-mad aesthetics of Spinch, a transportive side-scroller that explodes Jacobs’ illustrations out across a vibrant wonderland. As captured through Jacobs’ kaleidoscopic third eye, Spinch puts players in control of a hyper-agile organism, who moves through this interdimensional mess of astral pathways and alien artifacts on a quest to rescue its litter of missing offspring from an armada of misshapen oddities.

iam8bit will be taking pre-orders for the physical version of Spinch here.