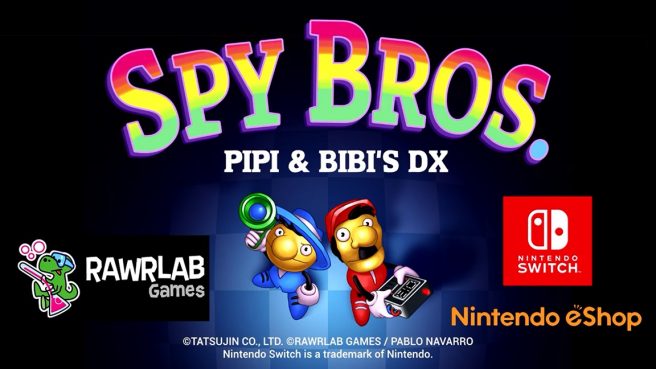 Spy Bros. is a remake of Pipi & Bibi’s (also known as Whoopee in Japan), an eroge arcade video game originally developed and published by TOAPLAN in 1991, being Tatsujin Co. Ltd, the current owner of the license.

“Spy Bros. (Pipi & Bibi’s DX)” is an single-screen action-platforming game reminiscent of Snow Bros and others of that time, where the players assume the role of Pipi and Bibi: two spies entering and bombing a series of six buildings protected by guards, scientists, divers, mob bosses, humanoid cats and other wacky individuals… and leaving the buildings just in time before they collapse from the explosions!

Spy Bros. new features
RAWRLAB Games, instead of just remaking the game with its 24 fun levels, is also improving a few gameplay issues, lowering its original extreme difficulty and adding new content, adding a lot of value to this new edition.

Removed a few extremely difficult spots that made the original game almost impossible to complete.

A totally different way to replay the game with fast-paced action mechanics starred by the “Spy Sisters”.

Instead of just cooperating, players will compete against (and mess with!) each other to see who plants the most bombs!

Complete the levels against the clock and beat your times!

No stretched mode, of course. Please, love your pixels.

The first trailer for Spy Bros.: Pipi & Bibi’s DX can be found below.