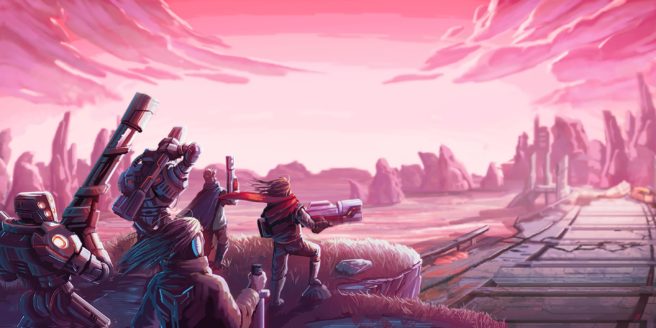 BitSummit’s website has updated, confirming another game that will be shown off for Switch at the expo. Star Renegades, a tactical squad-based rogue-lite RPG, will be released on the console.

A tactical squad-based rogue-lite RPG set in an endless interplanetary rebellion against an evil authoritarian empire.

Fusing a reactive, tactical turn-based battle system that emphasizes interrupts and counters, with a procedurally generated and emergent mission-based campaign and an intelligent Adversary system with enemy officers that evolve and move up in the ranks, every playthrough is unique, challenging, and never the same.

Features
– Outwit your foes with interrupts, counters, and combos in our fast-paced Reactive Time Battle System
– Survive the relentless onslaught of an Intelligent Adversary system that generates unique enemies and bosses that evolve as you play
– Unlock dozens of alternate characters as your surviving squad members form bonds and create progeny
– Battle your way into the heart of the Empire as our Rebellion Engine creates a unique experience with each playthrough via emergent gameplay and events, procedurally generated missions, shifting priorities, evolving enemies, and tons of equipment/upgrades for your squad